Review: NUN OF THAT (A Deadly Habit Cozy Mystery Book 1) by Morgana Best

I am finally taking time to work on the TBR list...  so reviews will abound starting with NUN OF THAT by Morgana Best!

Synopsis (from Amazon)
Rose Taylor is struggling to keep her furniture store afloat, but her financial problems soon become the least of her worries when her neighbor is murdered, with Rose as the only witness. The problem is, nobody will believe that she saw a nun fleeing the scene. The population of her small Australian country town increases with the arrival of Adam Bowen, an investigative journalist writing a book on an infamous gang of bank robbers, and Bunny, the murder victim’s estranged and colorful wife. Are these things connected, and if so, how? Rose plans to find out – because in her town, she’s having Nun of That. 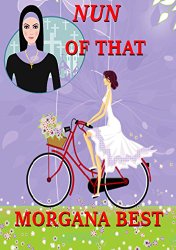 Review
Amidst police officers laughing at her report of an athletic nun about knocking her over as she fled the scene, Rose is determined to figure out what happened to the one elderly nun at the local convent. While the Mother Superior is no where to be found and the convent is being used for a training mission, Rose is still skeptical. Someone murdered her neighbor, and the flakey wife he never mentioned doesn't seem to have a clue or motive. But the why of the murder is unclear.  Adam is a distraction to Rose's sleuthing, mostly because she finds him attractive. But he is at least willing to go along with her in case the murder somehow connects up with the bank robber gang. Afterall, he is only in town because his leads on his story ended in this town.

Rose has a lot going on - her business that she needs to keep going, her interest in Adam, and her need to resolve the issue of the athletic nun and her neighbor's death.  Best does a good job of tying in clues, and a bit of the Australian landscape, with nun sightings and enough danger to keep the story moving.  There is a bit of humor and a touch of romance, as well as some conflict among friends.

This is the first in a new series by Best and is light and quick reading. The second, NUN THE WISER, is indicated as "out soon" and will hopefully fill in some more of the details on Rose and her friends, including Bunny.