Blog Tour and Book Review: CAUGHT UP IN IT by David Burnsworth

The award-winning diva, C, has got a big problem: someone wants her dead. A team of mercenaries attempts to gun her down in Kuala Lumpur. Lucky for her, Lowcountry Private Investigator, Blu Carraway, is already on the job there for a different client.

Double-lucky for C, they make their move when she’s chit-chatting with him in a bar. Unlucky for the mercenaries, four of them end up dead.

The hunt is on now for the mega-pop star. Where does she go to hide out? The sleepy islands around Charleston, South Carolina—Blu’s backyard. He’s already proven himself once, so C hires the Blu Carraway Investigation Agency to protect her for real.
The job takes Blu halfway around the world and several cities in between. The search for the truth reveals what could drive a person to want someone else dead.

And Blu Carraway ends up right in the way.

Blu's done with his job, or so he thinks, when he takes on a new client, C, who is both tempting and in deep trouble with who knows who. It looks like the people after C may be somehow connected to previous cases and his sometimes sidekick. Blu has to call in a lot of favors, not only to protect C, but to make sure he doesn't end up dead.

This is the third in the series, and Blu's "low country" ways continue to charm. Although there are references to the villains in the previous two novels, it can be read as a standalone - enough background is provided. Of course, it's always best to start at the beginning. There are continuous twists and turns, some humor, and the pace is fast. If you want a hard-boiled mystery for a break from cozy, you'll like this series.

David Burnsworth became fascinated with the Deep South at a young age. After a degree in Mechanical Engineering from the University of Tennessee and fifteen years in the corporate world, he made the decision to write a novel. He is the author of both the Brack Pelton and the Blu Carraway Mystery Series. Having lived in Charleston on Sullivan’s Island for five years, the setting was a foregone conclusion. He and his wife call South Carolina home.
Author Links

You are cordially invited to a destination wedding to die for…

Welcome to Bocas del Toro, a remote chain of islands off the Caribbean coast of Panama. Five days of glorious sun and lush rainforest await the forty guests celebrating Bridezilla Olivia’s dream wedding—but will a murder sink the catered affair? Before anyone’s got time to start working on a tan, an unfortunate snorkeling accident eliminates a member of the wedding party. Maid of honor Lexie Marino smells trouble, and is thrust into the responsibility of investigating, needing to solve the case before her bestie’s trip down the aisle gets tropically derailed. The show must go on.

Lexie’s a little too tall, a little too awkward, and a little too brokenhearted, but she’s determined to nail the real killer. Can this unlikely sleuth stay afloat as she’s hit by wave after wave of wildly entertaining characters, including an alpha bride, surfing detectives, and a high school flame long forgotten? You’ll find yourself laughing until the very end of Drowning Lessons, a debut cozy mystery that makes the perfect beach read. Rub in some coconut oil, dangle your feet in the crystal-blue waters of Dolphin Bay, and sip a cool drink as Lexie discovers the deductive superpowers she never knew she had. Let the party begin!

One thing's for sure, a destination wedding is not where brokenhearted Lexi wants to be and the bride to be isn't exactly sympathetic. With all the cell phones taken from the guests, it's no wonder everyone's a little tense. The not-so-accidental death doesn't help the mood. One member of the troop is dead and the rest are suspects.

From the poison dart red frogs to the beautiful setting of Dolphin Bay, there are any number of things that make this cozy mystery interesting and different from others. I liked Lexi's attitude, her loyalties, though seemingly misplaced, and her determination. Many interesting characters, most of whom aren't particularly likable, twists and turns, and not an obvious killer. Not a bad combination for a leisurely light read.


RACHEL NEUBURGER REYNOLDS is the author of The Red Frog Beach Mystery Series. As a playwright, her plays have been produced in London, Edinburgh and New York. After 25-years in New York City, she now resides with her husband between London and St Leonards-on-Sea in England. For news about Rachel and the upcoming Red Frog Beach Mysteries, check her out at RachelNeuburger.com.

One e-copy of the book will be given away to the randomly selected person who leaves a comment on this blog.  Please indicate the format you prefer in your comment. Giveaway will end June 7th.
Posted by Christa Nardi at 12:00 AM 4 comments:

Life has always been sweet on Georgia’s Peach Cove Island, but a case of murder has Marygene Brown down in the pits . . .

For generations, the women of the Brown family on Peach Cove Island have been known for their Southern sass and sweet homemade desserts at their beloved Peach Diner. Since their mother’s passing two years ago, Marygene has been stuck in Atlanta while her sister Jena Lynn has been running the family business. Now Marygene has left her husband and returned to her hometown, where she can almost feel Mama’s presence.

But all is not peachy back home. Marygene has barely tied on an apron when a diner regular drops dead at the counter. When it turns out the old man’s been poisoned, Jena Lynn is led away in handcuffs and the family eatery is closed. Now, to save her sister and the diner, Marygene must find the real killer. With some startling assistance from her Mama’s spirit, Marygene will be serving up a special order of just desserts . . .

Marygene hasn't been involved in the family business - or sleuthing - but she finds herself quite at home in the diner and enjoying the neighborhood, small town feel more than she remembered. She is sure her sister, Jena Lynn, couldn't possibly murder somebody and she is determined to prove it. At every turn, though, there are more complications and twists. Now Marygene has to decide who she can really trust. At least Mama's there to help her along.

This was an enjoyable read with great characters, a town that comes together, and a mystery that takes some work to figure out. Mama's spirit is especially fun and timely - well, most of the time.


FTC Disclosure: I received a complimentary copy of this book in the hopes that I would post an honest review. This has not affected the content of my review in any way.

The author is hosting a pre-order giveaway!


CHECK IT OUT HERE!

Kate Young writes humorous southern mystery novels. She is a member of Sisters in Crime and the Guppy Chapter. Kate lives in a small town in Georgia with her husband, three kids, and Shih Tzu. When she is not writing her own books, she’s reading or cooking.

A western noir classic mystery by bestselling author John Rose Putnam that will leave you teetering on the edge of your seat until the very last word.

When a popular high school senior, the daughter of powerful Laurel big shot, is found dead from a gunshot to the heart on the property of a cantankerous dairyman, suspicion falls heavily on the farmer and his football star son. 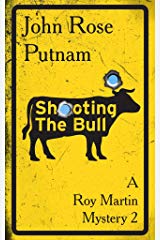 This is the second in the Roy Martin Mysteries, with Roy Martin, the Sheriff, having to deal with the murder of the daughter of one of the more powerful families in the county. The body is dumped just over the line and on the property of a cantankerous old farmer who responds to Roy's visit with his shotgun. Roy tells the farmer his bull may have had a run in with someone and is limping and then asks questions regarding the young woman.  Small towns and such, it comes out that Raelynn and the farmer's son, Will, may have been an item, much to the dismay of her parents. The son's not any more receptive to Roy than his father and things get a bit testy. Then there's the   disabled Marine who gets along with the cows and the bull.

Roy is a no-nonsense Sheriff and somehow manages to thwart the irate father's attempt to take the law into his own hands. How it all turns out is a bit of a surprise and the bull gets even. The pace is good and the characters are well-developed, although most are new to this book. This can easily be read as a stand alone. If you like westerns and mystery, you'll like this one. The third in the series, The Stink on Racoon Creek, released in March and is on my TBR list.