Blog Tour: FOOTPRINTS IN THE FROSTING by Laura Pauling


It’s the Grand Opening for Holly Hart’s new business, Just Cheesecake. When footprints in the frosting lead to a body facedown in one of her cheesecakes, Holly becomes a prime suspect.

With her opening day delayed, Holly deals with a nosy no-good reporter and the local cop, the handsome Officer Trinket, as she puts her sleuthing skills to the test to save her business and her name. With the help of her dog, Muffins, she needs to find the real murderer, before the killer looks to frost someone else.


Holly Hart has definitely met Murphy's Law as she tries to start over and open "Just Cheesecake" using the secret recipe she perfected in her mother's kitchen. The day her new venture is to kick off, her dog is missing and she runs out to find him in her cute jammies, and meets sophisticated Mason. Embarrassment plus. Muffin is crying over a dead body in her shop and she's Officer Trinket's prime suspect. Then there's crazy Charlene with her love of mystery and the reporter who keeps printing half-truths and painting Holly as the killer. Holly is determined to find the killer and instead stumbles on another dead body.

This is a quick read, just right for the beach. Characters are interesting and easy to keep straight -  my favorite is crazy Charlene and her conniving ways of helping with the mystery and matchmaking. I'm more than a little curious about the frequent mentions of the past life Holly's running away from. Hopefully more of the backstory will be revealed in the next installment. 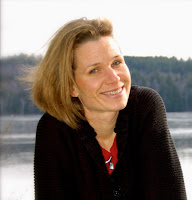 
Laura Pauling writes about spies, murder and mystery. She’s the author of the young adult Circle of Spies Series, the Prom Impossible Series, the time travel mysteries, Heist and A Royal Heist, and the Holly Hart Cozy Mystery Series: FOOTPRINTS IN THE FROSTING and DEADLY INDEPENDENCE with more coming.

She lives the cover of a suburban mom/author perfectly, from the minivan to the home-baked snickerdoodles, while hiding her secret missions and covert operations. But shh. Don’t tell anyone. And she may or may not actually bake cookies. You decide.

Visit Laura at http://laurapauling.com to sign up for her newsletter and receive a free Holly Hart cozy mystery novella.

Purchase Links:
Footprints in the Frosting