It’s peak tourist season in Oriole Point, Michigan—the blueberry buckle of the fruit belt. Nothing draws the crowds quite like their annual carnival. And nothing turns it sour faster than murder . . .

The Blueberry Blow Out festival has begun and it’s time for Marlee Jacob, owner of The Berry Basket, to shine. Unfortunately it’s also bringing out the worst in her fiancé Ryan Zeller. Ryan’s rivalry with Porter Gale, owner of Blueberry Hill Farm, spills over into a very public and very ugly fight. And after they compete in the pie-eating contest and a raucous tug of war, their orchard blood feud takes a deadly turn . . .

The death of the king of Blueberry Hill is a shock but not too surprising—he was a diabetic whose last pig out meal was deliciously fatal. But when authorities discover that someone tampered with Porter’s insulin, a tragic accident is looking like murder—and Ryan is the key ingredient. Now Marlee’s investigation to clear his name is taking her deep into the Gale family secrets, and she’s being shadowed every step of the way by a killer whose sweet revenge is just beginning . . . 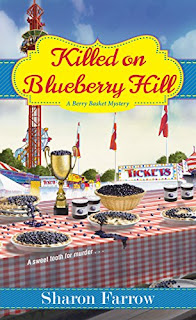 Marlee is making the most of the Blueberry Blow Out to bring in business to The Berry Basket.  Between her two young helpers, the shy baker, and herself the store and the booth at the festival are going strong. What should be a great and fun time is marred by the competition between the Zellers and Gales, with both families determined to win every competition. Engaged to Ryan Zeller, Marlee is volunteered for the women's blueberry pie eating contest. Only it seems, Ryan wants to make a lot of decisions for Marlee and that's an added layer of conflict. Add to that the ugly fight between Ryan and Porter, a less than heartfelt apology, and then Porter is dead.

Many of the towns people talk about the hostility and the tug of war incident, only Ryan has conveniently left to go fishing with his buddy. In between finishing out the festival, Marlee is busy trying to prove that Ryan didn't kill Porter. The more she tries to understand, the more secrets she uncovers and the more comfortable she is about the whole situation. Unfortunately, uncovering secrets is not always good for one's health, Marlee's or Ryan's included.

The story is well-paced and the ending isn't obvious, though believable. I liked Marlee and the Berry Basket crew. The story has a small town feel with feuding families, yet not immune to more big city problems. Although this is the third in the series, it's the first I've read. It can be easily read as a stand alone.  If you enjoy a cozy mystery, you'll enjoy Killed on Blueberry Hill. 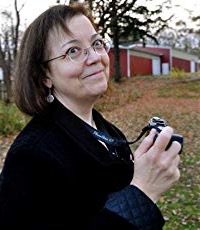 Born and raised in Detroit, Michigan, Sharon began submitting articles and short stories to magazines when she was just fourteen years old. Her award winning first novel was released in 1998. Published in mystery, fantasy, and romance, Sharon has written under various pen names. As Sharon Farrow, she writes the Berry Basket cozy mystery series, which was inspired by the beautiful village she lives in along Lake Michigan. With her college best friend and fellow writer, Sharon is also one half of the writing team D.E. Ireland, who co-author the two time Agatha nominated Eliza Doolittle and Henry Higgins mysteries.

Blog Tour and Review: BACK STABBERS : A Country Club Mystery by Julie Mulhern

Synopsis:
All Ellison Russell wanted was an update on her stock portfolio. Instead, she found her broker dead.

With an unexpected out-of-town guest at her house, Ellison is too busy for a murder investigation. Only this time, Detective Anarchy Jones wants her help, and she can’t deny the handsome detective. Can Mr. Coffee supply her with enough caffeine to keep her brain sharp and everyone else happy?

Juggling bodies (one, two, three, four), two-faced friends, her social calendar, and a cat (yes, a cat) is taxing but Mother might be the biggest challenge of all.

With a killer drawing closer, can Ellison put together the pieces or will she be the one getting stabbed in the back?

Ellison not only finds one body, not two, but three, and Detective Peters is none too happy with her. For that matter neither is Detective Anarchy Jones, her father, or her mother who obviously thinks Ellison must plan to find these bodies or be the one to call the police at least. Only, while she deals with the family scandal of her father's other daughter, Karma, Ellison discovers lots of things have been going on in the brokerage house - possibly the motive for all the murders.

As with the others in this series, Back Stabbers is well-written, well-paced, and includes an occasional touch of humor. 'Mother' rises to the occasion but only after chastising Ellison as usual. My favorite character, after Ellison of course, is Anarchy Jones. The family dynamic and the tension in relationships adds to the mystery. Although part of a series, this can be read as a stand alone. If you like smart, stubborn, and sassy women sleuths, though, you'd be better off starting at the beginning of the series.

Julie Mulhern is the USA Today bestselling author of The Country Club Murders. She is a Kansas City native who grew up on a steady diet of Agatha Christie. She spends her spare time whipping up gourmet meals for her family, working out at the gym and finding new ways to keep her house spotlessly clean–and she’s got an active imagination. Truth is–she’s an expert at calling for take-out, she grumbles about walking the dog and the dust bunnies under the bed have grown into dust lions.

November 2 – I’m All About Books – SPOTLIGHT

Anastasia Pollack’s son Alex is dating Sophie Lambert, the new kid in town. For their community service project, the high school seniors have chosen to raise money for the county food bank. Anastasia taps her craft industry contacts to donate materials for the students to make Christmas ornaments they’ll sell at the town’s annual Holiday Crafts Fair.
At the fair Anastasia meets Sophie’s father, Shane Lambert, who strikes her as a man with secrets. She also notices a woman eavesdropping on their conversation. Later that evening when the woman turns up dead, Sophie’s father is arrested for her murder.

Alex and Sophie beg Anastasia to find the real killer, but Anastasia has had her fill of dead bodies. She’s also not convinced of Shane’s innocence. Besides, she’s promised younger son Nick she’ll stop risking her life. But how can she say no to Alex?

USA Today bestselling and award-winning author Lois Winston writes mystery, romance, romantic suspense, chick lit, women’s fiction, children’s chapter books, and nonfiction under her own name and her Emma Carlyle pen name. Kirkus Reviews dubbed her critically acclaimed Anastasia Pollack Crafting Mystery series, “North Jersey’s more mature answer to Stephanie Plum.” In addition, Lois is an award-winning craft and needlework designer who often draws much of her source material for both her characters and plots from her experiences in the crafts industry.

November 1 – I’m All About Books – SPOTLIGHT

November 2 – The Book’s the Thing – REVIEW

November 3 – Here’s How It Happened – REVIEW

A high-society murder. A spirited lady detective. Can she out-class the killer before an innocent person takes the fall?

London, 1923. Olive Belgrave needs a job. Despite her aristocratic upbringing, she’s penniless. Determined to support herself, she jumps at an unconventional job—looking into the background of her cousin’s fiancé, Alfred. He burst into the upper crust world of London’s high society, but his answers to questions about his past are decidedly vague.

Before Olive can gather more than the basics, a murder occurs at a posh party. Suddenly, every Bright Young Person in attendance is a suspect, and Olive must race to find the culprit because a sly murderer is determined to make sure Olive’s first case is her last.

Murder at Archly Manor is the first in the High Society Lady Detective series of charming historical cozy mysteries. If you like witty banter, glamorous settings, and delightful plot twists, you’ll love USA Today bestselling author Sara Rosett’s series for Anglophiles and mystery lovers alike. Travel back to the Golden Age of detective fiction with Murder at Archly Manor.

With the concerns about Alfred's true motives in marrying Violet, Olive, in need of a new profession, is quick to volunteer to check out Alfred and her Aunt agrees to pay. She has already started to collect clues, when Alfred is murdered. Her cousin Violet is the suspect and Olive's determined to help her. Violet's sister, Gwen is a sometimes reluctant helper and not a fan of Alfred from the beginning. The men who know Alfred best, from host Sebastian to Tug and Monty have interesting personalities and the story behind Alfred's friendship in Sebastian adds to the twists in the story. Lady Pamela, Thea and Muriel round out the characters.

The mystery is well-paced and Olive is a likable main character for what looks like a new series. The characters and the setting are well described to provide the feel and ambiance of 1923 London. If you enjoy British cozy mystery - or cozy mystery at all, you'll enjoy Murder at Archly Manor. 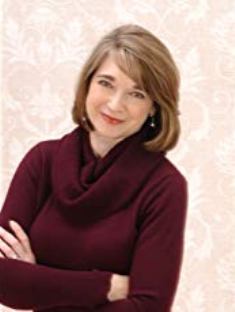 She is the author of the Murder on Location series, the Ellie Avery series, the On the Run series, and the High Society Lady Detective series. Sara also teaches an online course, How to Outline A Cozy Mystery.

Publishers Weekly called Sara's books, “satisfying,” “well-executed,” and “sparkling.” Sara loves to get new stamps in her passport and considers dark chocolate a daily requirement. Find out more at SaraRosett.com.

October 17 – Escape With Dollycas Into A Good Book – REVIEW

October 22 – I'm All About Books – SPOTLIGHT

October 24 – Here's How It Happened – REVIEW
Have you signed up to be a Tour Host?