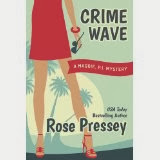 Maggie becomes a PI when she inherits her uncle's faltering Miami Beach P.I. agency.  She doesn’t really know much but completed the coursework and is ready to go with her "office manager"/assistant, Dorothy.  With all Maggie's studying and the internet to help her, she starts to think being a PI isn’t so bad.  About then she stumbles on a dead body and then another washes ashore.  Maggie just continues to stumble into trouble and into the line of a bullet, all with Dorothy  as her sidekick waiting in the car knitting and shaking her head.  Of course, there is also the hunky cop, Jake, and hints of attraction mixed with Jake’s continued suggestions that she stick to following cheating husbands and the like.  Cute story, likeable characters, quick read.  Looking forward to the release of Murder is a Beach in December (available on Amazon for pre-order).

I am making every effort to post a review on each book I read, not only here, but on Goodreads and Amazon.  It is very important to authors for reviews to be posted!  Help an author - Post a Review!

Coming soon a review of  Strange Situation at Emlee by MaryJo Dawson.  Also, as part of blog tours, look for reviews of Knowing Vera by Rachelle Ayalla and Deathbed and Breakfast by Bart J. Gilbertson.

Posted by Christa Nardi at 1:16 PM No comments:

Making Progress on All Fronts

It's been a busy week.  Marketing a book is a new experience and it is hard to figure out how to best go about it.  I have posted to get reviews in multiple venues since that is really the best advertising for any book.  I was able to find some time for writing this week, and have the first 20,000 words of Cold Creek #2 drafted and a plot map developed.  Given the importance of reviews, I am making a concerted effort to catch up on reviews of books I have read...  Also have signed up to be part of a blog tour on a romantic suspense, Knowing Vera by Rachelle Ayalla on November 7th.  Then another blog tour for a mystery, Deathbed and Breakfast by Bart J. Gilbertson on November 20th.

For this week, I finished my first holiday themed book:  Sherlock’s Home: The Adventure of the Contentious Crone (Finn Sherlock) by Pamela Rose. 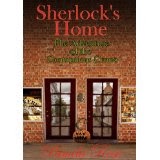 The story is about twins, Finn and Echo Sherlock, who own the Sherlock’s Home Mystery Bookstore & the 221b Bakery. They live above the two stores with their Uncle Oz. Beginning with Halloween and ending with Christmas, Finn, along with Echo and Uncle Oz cover the holidays in baked goods and theme-named drinks.  Halloween brings a little extra though in the form of Odds Bodkins, dead in a secret passage behind the fireplace in the bookstore. No one knew the passage existed or how Odds Bodkins managed to get in there without being seen. Finn and Echo work hard to find out who killed the so-unliked Odds Bodkins much to the annoyance of Sheriff Wavy Davey. The characters are quite quirky and the names, even for the two hairless kittens, are creative and descriptive at once.  This was a fun read with a lot of twists and turns, conflicting motivations, and romance on multiple levels.

Posted by Christa Nardi at 6:39 PM No comments:

In between writing this week, I managed to get a few books read...

Tonya Kappes’ Strung Out to Die (A Divorced Diva Mystery) is centered around Holly Harper (and her pet pig Willow).  Holly owns the Beaded Dragonfly, a bead shop in a small town.  Unfortunately, her cheating ex-husband Sean also lives in Shawnee and is just waiting for the business to fail.  When Doug Sloan is found murdered in the back room of the shop, it isn’t looking too good for Holly.  But not only is Holly a suspect, but so is Sean.  Holly decides it isn’t in her best interest to just hope that the police figure out who the murderer is, and, along with the other divorced divas, she plays detective.  It is well-written and there are several twists to the story line.  I didn’t read the Prequel, “Bead of Doubt”, but may pick it up to get a better feel for Holly. This is only one of the series written by Tonya Kappes, so be sure to check them all out!

Cut Loose (Dusty Deals#2) is about ‘antique’ store owner Lucy Matthews trying to make a go of it in Helena.  Things should be looking up – she’s dating a detective (Peter) and it’s rodeo time.  She even has a booth at the rodeo and great hopes that this will ensure that she can pay the bills.  The problem is that the Detective’s trophy ex-wife and her Australian shepherd are also getting ready for the rodeo and seem to be spending a lot of time with Peter.  In an effort to avoid running into the two of them, Lucy ducks into the nearest trailer and stumbles on the body of the dead rodeo queen.  Add to that some other evidence, and Lucy is first in the line of suspects, especially since she is too embarrassed to explain why she was in the trailer. She clearly needs an attorney but doesn’t have the money to handle that and other expenses.  In the meantime, she agrees to let her untrained dog Kishka be entered into the contest to please Peter’s son.  Davies and Devoti have multiple conflicts and complexities and spin the story to a somewhat unexpected ending.

Coming up: November 7th: Blog Book Tour Stop for Rachelle Ayella's Knowing Vera (Chance for Love #3) - a touch of romance between the mysteries...
Posted by Christa Nardi at 12:30 AM No comments:

The proof arrived and Murder at Cold Creek College is published! It is available on Amazon (Kindle version and paperback) and through Smashwords if you prefer a different eBook format!  You can also get the paperback direct through Createspace Here's an excerpt of the first chapter...

From Chapter 1
“Oh, have you heard what happened at the rec center? I don’t think we ever had a murder on campus before!” Terra exclaimed. Hearing that, I abandoned my computer and joined them in the hall.  I am nothing if not curious.

“Murder? I thought there was an accident?” I asked.  I wondered if Terra exaggerated the situation a bit.
“Nope! Joe just called me from the paper, and he’s on his way over to get some background information for the paper,” Terra stated. Her husband, Joe, worked for the Cold Creek Gazette and I often wondered if it was just a natural consequence of his job that Terra seemed to know everything about everybody. It wasn’t like she was a gossip, but she always seemed to have the scoop on what was happening. On the other hand, she was very sociable, like Kim.
“Who was murdered? How?” I asked, still not completely convinced. I thought of the childhood game of telephone when the same sentence was repeated to a series of people, one after the other, and how different the meaning by the time it reached the last person.
“Oh, my god, I was there. I could have been murdered too!” Kim exclaimed, hands to her mouth. She clearly didn’t have any trouble believing what Terra said. Not knowing the details, I guessed it was a logical leap that she was in the same place and could have been affected.
“Joe didn’t say who, just that the scene was being treated as a murder scene.  He was assigned to get backfill for the story that would come out. He said he’d be over to talk to faculty and staff in a bit. We turned the news on in the office, but so far haven’t heard anything. They may not be saying yet. You know, maybe they haven’t notified next of kin or something,” Terra continued with a shrug. Her nonchalance was a stark contrast to Kim’s response. Ali hadn’t said anything, but shook her head. Like her name, Terra tended toward being down to earth and that gave some credibility to the idea of a murder.
“Kim, did you see anything this morning that looked suspicious?” I asked thinking back to her comments about the questions she’d been asked.  The questions and police presence were making sense if this was a murder.
“Sher, you know me on the treadmill. Headphones on and zoning out for five miles. I couldn’t even tell you who came and went while I was there. When the police interrupted us to ask questions, I think there were a few students and a man.  I think I’ve seen him over in the administration building a few times and at college functions. I don’t remember his name though,” she related, shaking her head slightly. “Maybe if I paid more attention I could have stopped it…,” she added as she clapped her hands to her face again.
“Don’t be ridiculous! Unless it happened in the cardio suite, there’s no way you could have done anything,” I assured her. “I’m sure you would have done something if you could have."

Posted by Christa Nardi at 7:19 AM No comments: 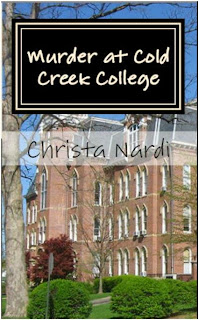 It has been a very busy week making minor changes (thank you to my beta readers Jan and Andra for their feedback!) and then formatting everything for printing in Createspace, finalizing the cover...  Oh, yeah, here it is!!!!   Isn't it great! (thank you CS!)


And then to format for the various different eBooks through Smashwords while waiting to get the proof from Createspace!  I can't wait to see it in print!  The current plan is to publish by October 15 for all media!  And of course, I've already started to think about the sequel and develop plot lines...  I'll keep you posted!

So what to do while I wait for the proof to arrive?  Read, of course!  I'm trying to see if I can get onboard with some of the blog tours, but in the meantime, I will just post reviews here of whatever I happen to have read.

Today's review is on Joanne Sydney Lessner's book Bad Publicity. This is the second in the Isobel Spice series. Isobel is a temp worker and with the help of the manager of the temp agency  (James) and an old friend from college (Katrina), she lands a cushy temp job at Dove & Flight assisting where ever she is needed. The position is great because she is an aspiring actress.  Problem is, she happens to serve coffee to an important client and key person in a potential merger and he is suddenly dead.  Second problem is that her friend Katrina wasn't in favor of the deal that client was selling and it looks like she may be the killer.  Isobel is likeable and her relationships have a good measure of tension, along with a touch of romance. Although Isobel works to eliminate possible guilty parties, the who-done-it isn't obvious.  Add in a bit of romance...  what more could you ask for?

Posted by Christa Nardi at 4:06 PM No comments: