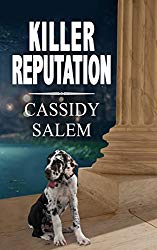 Adina can’t resist snooping when someone she knows turns up dead. Again.

When a colleague at a prestigious think tank meets a violent death, Adina’s not convinced any of the obvious suspects disliked him enough to want him dead. Can the young research assistant, her quirky neighbor, and a lovable rescue pup help the police put together the pieces of the puzzle?

Killer Reputation is the third mystery in the Adina Donati, Accidental Sleuth Series by Cassidy Salem. The books are standalone reads and can be read in any order.


Bonzo’s insistent barking woke me out of a sound sleep. The glowing digital display on my clock radio showed it was 1:35 in the morning. Perched at the window, paws up on the sill, the dog focused his attention on the great outdoors.
I dragged myself out of bed, hoping to quiet him before he woke up my housemates. Tail wagging, he gave my hand a quick lick before returning to his vigil at the window. My bedroom was at the back of the house, overlooking a small fenced yard. I looked outside but neither saw nor heard anything out of the ordinary.
I called my loveable mutt back to his doggie bed, gave him a quick tummy rub, and went back to sleep.

I was in the kitchen when Lynda, my housemate, returned from her early morning run. Instead of heading straight for the shower, she burst into the kitchen. “Something must have happened down the street at Patrick’s place. An ambulance and a police car are out front.”
“Bonzo, I think it’s time for a walk.” I grabbed his leash and he sprinted to the front door. More often than not, I didn’t have time to take him for a proper walk in the morning. Instead, he had to make do with a quick romp in the backyard and do his business while I got ready for work. He was happy to reap the benefits of my curiosity.
A police cruiser was parked in front of the pale yellow house on the corner. The ambulance was nowhere in sight. We hadn’t even reached the curb when our next-door neighbor, Mr. Crockett, waved me over. A retired policeman in his eighties, Bartholomew Crockett lived alone and spent most of his time on the front porch.
He met me halfway down his flagstone path, an oversized, dark grey cardigan buttoned up to his neck and hanging over his pants. “A lot of excitement this morning. Something happened at the house where those two young guys live. Always having wild parties and such. You girls know them, don’t you?”
“Sure, we know them. Patrick works at the DIPPeR and Jared invited us to a party over there last month. Do you have any idea what happened over there? Or who was hurt?”
“One of the guys, I think. Couldn’t tell which one from here, and I didn’t want to get in the way – I’ll see what I can find out when the officers come back out.”
“And you’ll let me in on what you find out, I hope.”
“Of course.”
I took Bonzo for a short stroll in the opposite direction before returning home. By then, Lynda had showered and was enjoying a steaming cup of java. She looked up when I came in.
“Find out anything?”
“Not much. I’ll tell you on the way to work.”
Lynda gulped down the last of her coffee, and we headed out to catch the Metro.
Lynda Lowell worked in the Publications Department at the Drake Institute for Public Policy Research – what we insiders refer to as the DIPPeR. That’s how we ended up as housemates. Lynda Lowell, Shari Moss, and I had been sharing a three-bedroom house in the northwest section of Washington, D.C. since February. So far, it was working out great, and a major improvement over the basement studio apartment where I had spent my first two years in the city. Especially since it meant I could have a dog.
“So, what did Crockett tell you? If anyone knows what happened, it’d be him.”
When we first moved in, it felt like he was always watching us. It was almost creepy. That is, until I started talking to him and realized he’s a kind-hearted, lonely old man.
“He doesn’t know much. Not yet, anyway. He said they took someone out on a stretcher. Thinks it was one of the guys who live there, meaning Patrick or Jared. He couldn’t tell who.”
“His eyes are probably not so good at his age.”
“In all fairness, from a distance, lying on a stretcher, would you be able to tell who was injured?”
“Maybe not.”
“Anyway, Mr. Crockett did say he’ll try to wheedle some intel out of the police officers before they leave. I think he misses being a cop. Did you see Shari this morning?”
“Nope. She was gone before I went out for my run. She probably just had an early shift this morning.” A nurse at a hospital in Silver Spring, it wasn’t unusual for our housemate to be up and out of the house before we surfaced.
“She’s been spending a lot of time over there. I hope she’s okay.”
“I heard her come in late last night, so I’m sure she’s fine.”

Excerpt from Killer Reputation by Cassidy Salem © 2018 All rights reserved. 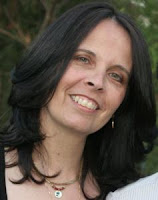 Cassidy Salem has always been an avid reader. She is especially fond of mysteries (both cozy and traditional) and police procedurals. Cassidy also enjoys reading historical fiction focused on American and world history, as well as the classics. When she’s not reading, she enjoys music and spending time with family and friends, and travels with her husband and son whenever possible. Her travels have taken her to destinations throughout the United States, Europe, and Scandinavia.

Amazon
Posted by Christa Nardi at 12:00 AM No comments: 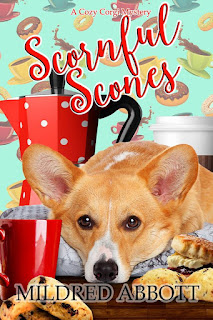 With summer approaching, Estes Park is abuzz with flowers, baking, tourists, and… murder.

Tourist season is about to begin, and the lovely weather has Winifred Page and her corgi sidekick, Watson, leaving the comfort of the Cozy Corgi Bookshop and Bakery to reluctantly attend a celebration at the Black Bear Roaster coffee shop. But a chill of uncertainty settles over Fred when a choking death doesn’t seem so accidental—despite the dry, hazardous scones.

As Fred and Police Sergeant Branson Wexler rekindle a possible romance, Fred shares her suspicions. But is she seeing murder at every turn? Learning to trust her gut feelings, Fred risks the ire of the coffee shop owner to investigate not one, but two, deaths.

As suspects and motives abound, old resentments are uncovered, and Fred and Watson build new friendships even as they follow the crumbs to find clues to a killer.

A piercing scream shattered the peaceful ambience of the bookshop. We’d closed the store ten minutes before, and I’d stolen a moment to curl up and read on the Victorian divan. At the sound, I let out a yelp and flung the book from me. Luckily it landed a few feet from the fireplace.
A clatter of claws came from the other room.
I looked over to find Watson scrambling to a standing position as quickly as his little corgi legs would allow. He glared at me as if I was the one who’d disrupted his nap in the sunshine.
Before I could make sense of a scream coming from the bookshop—it had to have come from there, as loud and clear as it had been—there was a pounding above my head followed by a squeal.
Katie?
Must be. Though I’d never heard my best friend and business partner make such a sound before.
Leaving the book on the floor of the mystery room, I hurried to the main portion of the bookshop and rushed up the stairs to the bakery two at a time, having to hike my pea-green broomstick skirt slightly to keep from tripping.
Nails still clicking on the hardwood floor, despite his slow start, Watson passed me on the staircase and entered the Cozy Corgi bakery a few strides ahead of me.
I found Katie instantly, standing behind the marble-topped bakery counter, and the mystery of the pounding was solved as she clenched her fists over her chest, performed a little jig, and let out another squeal.
Okay, apparently she wasn’t in danger of dying. Although, perhaps she was possessed.
Katie caught me watching, and though a blush rose to her round cheeks, she didn’t seem able to stop from giving another excited jig. With her brown curly hair bouncing around her face, she was like a little kid walking in on a surprise birthday party.
I cast a quick glance around the bakery. Atypically, the randomly arranged antique tables, rustic chairs, and overstuffed couches were unoccupied in front of the wall of windows overlooking the downtown of Estes Park. Oh, right, not that atypical, I had to remind myself; we’d closed the shop in the middle of the day.
“I’d accuse you of trying to scare away the customers, if we had any. I know we’ve been slammed and it’s nice to have a break, but I’m pretty sure people probably heard you on the street.”
“Good!” Katie squealed a third time. She literally seemed like she might be on the verge of a seizure. “I want them all to hear. And after this, we’ll have a whole new definition to the word slammed. We’re going to be so packed they’ll be lining up all the way down the block.” Another squeal.
“Katie.” I crossed the bakery and took her hand over the counter. “You screamed like you just discovered zombies were real, and now you’ve squealed four times.” I cocked an eyebrow at her but wasn’t quite able to hold back the grin. “Who are you and what have you done to my best friend?”


She whipped her hand free, grasped the laptop, and spun it in my direction. “Check this out!” 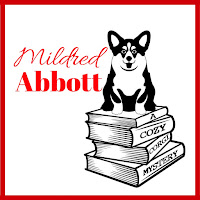 Reading the Cozy Corgi series is pretty much all you need to know about Mildred. In real life, she’s obsessed with everything she writes about: Corgis, Books, Cozy Mountain Towns, and Baked Goods.  She’s not obsessed with murder, however. At least not at her own hands (nor paid for… no contract killing here). But since childhood, starting with Nancy Drew, trying to figure out who-dun-it has played a formative role in her personality. Having Fred and Watson stroll into her mind was a touch of kismet.

Mildred Abbott is giving away a $25 Amazon Gift Card!
Terms & Conditions:By entering the giveaway, you are confirming you are at least 18 years old.

One winner will be chosen via Rafflecopter.This giveaway ends midnight July 27.
Winner will be contacted via email on July 28.
Winner has 48 hours to reply.

Good luck everyone!
ENTER TO WIN!
a Rafflecopter giveaway

Visit us at Pump Up Your Book!