Today, I'm happy to have Morgan St. James, author of Silver Sisters Mysteries Series , as my guest.  She is sharing her ideas about mystery and humor! 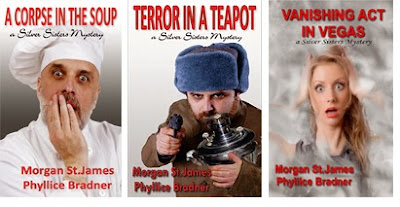 My sister Phyllice Bradner moved from Los Angeles California to Alaska when she was only twenty—just about the time we probably would have become friends. I’m five-and-a-half years older, so when we were kids she was always the “tag-along” little sister. Anyway, while she chalked up marks in the New Frontier, I remained in Los Angeles. Our mother became the link, telling each of us what the other was doing, so we rarely communicated directly and barely knew each other until we wrote our first book together. We might have spoken to each other two or three times a year on the phone—long distance calls were very expensive back then—and we only saw each other the occasional times she visited L.A. I don’t do cold, and wasn’t about to travel to the frozen North, although after we began to write together I made many trips to Juneau, Alaska.

When Mom had mini-strokes, Phyllice traveled to L.A. to help deal with Mom’s health and getting her settled in assisted living. Wonder of all wonders, during those two weeks while she stayed at my house, we discovered we had three loves in common--Mom, each other and funny mysteries. We were both published writers and during that visit conceived idea of writing the award-winning Silver Sisters Mysteries.

We’d grown up in a zany family and were able to translate that humor to our books. Every book draws from some of the crazy situations of real-life events.

The Silver Sisters are identical twins loosely based upon the our own diverse personalities. Goldie Silver, an over-the-hill flower child who owns an antique store in Juneau, Alaska is the "salt of the earth” is much like my sister. She would give someone the coat off their back as the cliché goes, then ask if she could get them a coat. At this point, I must say that the other twin, Godiva Olivia DuBois--a wealthy, manipulative widow who is a syndicated advice columnist to the lovelorn and lives on an estate in Beverly Hills, is somewhat patterned after me although I’m not syndicated but have written over 600 columns about the craft and business of writing, I admit to being manipulative but don't live on an estate in Beverly Hills. I did live two houses outside of Beverly Hills at one time, though. The street changed names at our corner. I’m far from a millionaire and I’m not a widow. But Godiva has many of my traits as Goldie has many of Phyllice’s. That’s a definite plus, because we always know how each twin will react in a given situation.

The fiesty 80-year-old mother Flossie and Uncle Sterling, former vaudeville magicians who love to go undercover dressed in disguise, are inspired by Mom, our beloved Aunt Edna and Uncle Sol, plus one of our father’s characteristics—he loved to dress in costumes, and that has carried over to our kids. Other supporting characters are composites of our relatives, kooky friends or pure imagination. As we write, we love to relive and use some of the funny situations we have experienced, and that only tightens our bond. As we’ve written through the years now, we have become best friends, and that is worth everything.

The 3rd fast-moving funny Silver Sisters whodunit, “Vanishing Act in Vegas,” featuring the zany identical silver-haired Mae West lookalikes, was recently released and is available from most online booksellers or can be ordered at your favorite local bookstore. In this escapade, the twins and their mother and uncle visit Las Vegas when Godiva's son moves there and falls in love with a beautiful magician. But there is more to Mara the Magnificent than meets the eye, and a string of murders follow. Twists, turns and a surprise ending will delight whodunit fans. 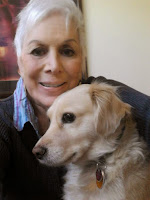 A frequent panelist, moderator, speaker and radio talk show host, Morgan St. James also presents a variety of workshops and has written over 600 published articles for the Los Angeles and Las Vegas editions of Examiner.com. She publishes the free bi-monthly eZine “Writers’ Tricks of the Trade.”

With 14 books to her credit, in addition to writing her own novels like “Betrayed” and “Confessions of a Cougar,” as well as “Writers’ Tricks of the Trade: 39 Things You Need to Know About the ABCs of Writing Fiction,” a handbook for writers at all stages of their careers, Morgan and her sister Phyllice Bradner co-author the award-winning Silver Sisters Mystery series. “A Corpse in the Soup” was named Best Mystery Audio Book in 2007 by USA Book News, the 3rd book, “Vanishing Act in Vegas,” recently released, and they are currently working on the 4th book in the series, “Diamonds in the Dumpster.”

Many of Morgan’s award-winning short stories appear in her single author anthology, “The MAFIA FUNERAL and Other Short Stories” available as an audio book in addition to the paperback and Kindle editions. She has also contributed stories to various anthologies featuring multiple authors including two Chicken Soup for the Soul books.


Amazon Links:
A Corpse in the Soup
Terror in a Teapot
Vanishing Act in Vegas
Posted by Christa Nardi at 12:00 AM