The back story of Prestige, Privilege & Murder 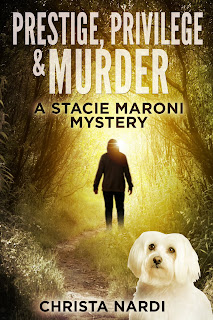 Thirty-something Stacie Maroni Noth should have been on top of the world. She married Ted Noth, a prominent lawyer and son of an even more prominent lawyer. Despite the high society and country club opportunities, Stacie went against the Noth family culture and maintained her independence - she had a good job as HR specialist at a large insurance company.

Her life changes drastically when Stacie catches Ted in the "act" and files for divorce. The final papers are in the works with the custody battle over Jasper, their maltese, finally resolved and Ted is murdered. Stacie is the obvious suspect, at least from the perspective of the Noth family. Not by design, Stacie ends up helping with the investigation as it begins to look like she may be the next victim.

Prestige, Privilege & Murder is available through AMAZON and FREE with Kindle Unlimited

Here is an excerpt:

The next week, my breakfast on the table, the doorbell rang. When I opened the door, the sight confused me.
“Ma’am. Mrs. Noth?”
“How did you find me?” I asked Rick Murdock as he stood on my front step. Even two weeks later, I hadn’t forgotten how good he looked or how humiliated I felt about that night.
“Ma’am. Your address was on the divorce papers. Can we come in please?”
My brain kicked in and I realized Rick wasn’t talking – it was the other man on the step. The balding stocky one in uniform with a scowl on his face, a smoker from the odor wafting off of him. And then I realized Rick was in uniform, too. He still looked good and gave off the woodsy scent.
“What’s going on?” My gaze went from one man to the other.
“Mrs. Noth, if you don’t want us to come in, we can go down to the station. We have some questions we need to ask you.”
I stepped aside so they could come inside. “I don’t understand. What kind of questions?”
My thoughts were running in circles. Could I have broken a law at the Creekview Lounge that night and not have remembered? Did Rick think I was soliciting? Did they catch me on camera drinking and driving?
“May we sit down? I’m Officer Flatt and this is Officer Murdock.”
“Sure… What’s going on?”
“Mrs. Noth when was the last time you talked to or saw your husband?”
“As I’m sure he told you, it was yesterday at a meeting with our lawyers. Is he still complaining I refused the ‘irreconcilable differences’ lies?” My anger at Ted surfaced once again.
“What time was that ma’am?”
“The meeting was at 3:30. I had to leave work early to make it there on time. He finally grabbed the papers and left, must have been after 4. I was home before the 5 o’clock news. I don’t understand. Is he accusing me of something? Are you here to serve me a gag order?” I huffed, my anger rising.
I glanced from one officer to the other. Rick avoided my gaze and shuffled his feet.
“No ma’am. Mr. Noth isn’t accusing you of anything. He’s dead and…”
I didn’t hear the rest of his sentence. “What? No!” And then I passed out.
I groaned and opened my eyes. Rick stood there with a glass of water. “Here, drink this.”
I sat up and looked to Officer Flatt. “I’m sorry. I don’t usually faint. Did you say Ted was dead? That can’t be. I just talked to him yesterday.”
“That is what I said. He was murdered sometime last night.”
“Murdered?”
“Ma’am. After you left your husband yesterday, what did you do?”
“I came home.”
“Can anyone vouch for that? Anyone here with you?”
“Huh? What? No one was here with me. It was just me and a half gallon of Rocky Road ice cream.” Then it dawned on me. This man suspected I’d killed Ted!
“Oh, my gosh. You think I killed him? I can’t even kill spiders.”
Officer Flatt shook his head a bit before he answered. “Calm down. We have to ask these questions.”
“I’ll get you more water.” Rick picked up my glass and disappeared into my kitchen. He came back with the water and nodded to Officer Flatt. “One empty Rocky Road carton in the trash.”
I glared at him. How dare he check my trash? “Just so you know, I didn’t eat it all at once.”
His mouth twitched, but he didn’t say a word.
“Just a few more questions. About your divorce…”
“Excuse me, but do I need to call my lawyer? I don’t think I should talk to you until I call my lawyer. Of course, he’s a divorce attorney, but he must know something about other kinds of law, right?”
Rick was back to staring at the ceiling and Officer Flatt studied the floor. Standing up, Officer Flatt put his little book and pen in his pocket. “We’ll be in touch or Detective O’Hare will be if there are any other questions. Here’s my card.”
He started to leave, Rick following his lead.
“Wait. Has anyone else been notified? Do I need to call his family? What should I tell them? Where is he? Who will take care of the funeral?”
Officer Flatt blinked before he answered. “You’ll have to talk with Detective O’Hare at the Beckman Springs Police Department.” He shook his head as he turned and left. Rick hesitated and then was gone.


My eggs were cold, but it didn’t matter. I’d lost my appetite. 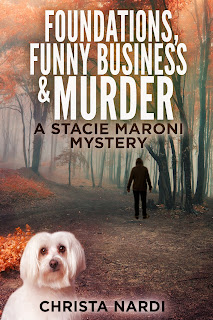 The best of intentions shouldn't include murder.


An HR specialist and trauma counselor, Stacie is on the board of a fledgling non-profit foundation set up to benefit victims of domestic violence. After a slashed tire, attempted break in, and a murder, Stacie isn’t buying coincidental bad karma. Someone wants her off the board - at any cost. Her fancy surveillance equipment, impressive alarm system, and a ferocious Maltese dog offer only so much protection. Enter Kevin McNair, a smooth talker with piercing blue eyes. Can she trust him with her heart or her life?


Here is an excerpt: 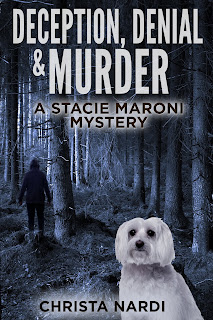 A domineering co-worker, a new flirtatious neighbor, and a dead body with way too many questions.

As HR Specialist and trauma counselor, Stacie Maroni is used to dealing with difficult situations. When her night out is derailed by the discovery of a body, she’s glad she’s not involved. That is, until the murder affects her close friends and makes for awkward situations with the men in her life, her father included. With her friends potential suspects, Stacie works with the police, only the suspect list is slim and she’s grabbing at straws.

Here is an excerpt: