SPOTLIGHT: Sunny Side Up! by Maureen K. Howard

It's my pleasure to have Maureen Kovach here today to talk about SUNNY SIDE UP!  Maureen is this week's SPOTLIGHT AUTHOR of the Rave Reviews Book Club!

“The Story Behind the Story”
~by Maureen Kovach

Sunny Side Up, the first book in our Lake Erie Mysteries series, is set on Kelleys Island in Lake Erie, Ohio. It is a real place, and one of our favorite destinations for an afternoon visit or a week-long stay.

My husband, John, and best friends and boating companions, Lynn and Greg Wagner, often skim the short distance across the lake from our homeport in Marblehead to the quaint, 4.41 square mile village that makes up the entire island.

The first stop Lynn and I make nearly every trip is the gift shop, Vi’s Island Treasures. Behind the signature purple door, we are always happy to discover new nautical-themed gifts, a fine line of clothing, and beautiful sterling silver and 14kt. gold jewelry. Vi (short for Violet) always makes sure we leave with a little purple bag engraved in gold script containing just the right something.

Readers will recognize many similarities between my friend, Vi, and Ruby Burns, a central character in Sunny Side Up, proprietor of the fictitious Ruby’s Treasure Chest. One similarity that cannot be ignored is the fact that both boutiques, the real and the fictional, are destroyed by fire.

Here’s where it gets interesting. On August 19, 2010, Vi’s original shop on Division Street was demolished. On the morning of August 20, the four of us vacationing boaters were having coffee, enjoying the cool, early morning breeze from our docks in Huron, Ohio, the second stop on our planned week-long summer trip. The noise of police helicopters interrupted our peace and quiet. Rescue boats with flashing lights zipped across the water heading straight for Kelleys Island. Greg commented in his dry, offhand manner, “Maybe my dream has come true. Maybe Vi’s burned down.”

Gulp. No sooner had he said that, than Lynn’s cell phone rang. On the other end, her son asked, “Mom, are you guys okay? I just heard the news.”

“What news? What are you talking about?”

“There’s a big fire on Kelleys Island. Vi’s was burnt to the ground.”

Double Gulp. Yesterday, Lynn and I were chatting with Vi as she rang up our purchases. Our husbands were waiting not-so-patiently a few doors down at the Caddyshack, our favorite sports bar with the best pizza on the planet. “You know, Vi, our husbands are outside plotting night maneuvers to come back and burn your store down so we will stop spending so much money in here.” Seriously. Those words were spoken just hours before the fire. And now, there we sat, watching smoke waft across the lake and wondering when the cops would be contacting us.

Lucky for us, we learned over the course of the next few days that the fire had originated in the attic of a neighboring store. The fire quickly spread and destroyed the entire strip of attached businesses. Ohio state fire marshall later ruled the blaze had started after a work lamp was left on in the attic of one of the buildings. But still. The seed of a murder mystery was planted. Ideas sprouted and bloomed wildly in my mind. Finally, my daughter, Brigette, who was getting tired of hearing me talk about it, suggested we write a novel together. And the rest, as they say, is history.

Unlike the historical facts, however, in the novel, there is a victim in the fire. The book’s mystery revolves around a charred corpse discovered in the attic of Ruby’s Treasure Chest after it is destroyed in a suspicious fire.

The main characters, best friends Francie and June, visit many of the real-life mainstay attractions of the island as they try to figure out the identity of the mystery corpse, and clear the name of Francie’s husband, Hammond, who seems to have disappeared while circumstantial evidence keeps piling up against him, pointing the finger of guilt in his direction.

Our first book-signing of Sunny Side Up by Maureen K. Howard (the collaborative pen name of Maureen Kovach (me) and Brigette Howard (my daughter) was held at the new location of Vi’s Island Treasures, which by the way, is housed in a historic former convent built entirely of stone.

Author Bio:Maureen K. Howard is the pen name of mother/daughter 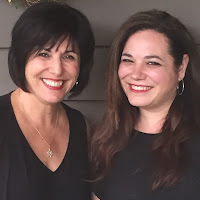 writing partners, Maureen Kovach and Brigette Howard. They both live in Findlay, Ohio. Maureen recently retired from a long career as a high school English teacher and now focuses her time on spoiling her three granddaughters, spending long weekends at the lake with her husband and their golden doodle, and making friends with fellow mystery writers and readers across the globe via social media. Oh yeah, she also writes books. Brigette works full time managing multiple national restaurant franchises. She enjoys taking her charcoal lab on running adventures and spends her free time reading, gardening with her husband, cooking, and planning the perfect murder.

Book Synopsis:
"Drink in one hand, credit card in the other, and everything else will sort itself out."
The school year is over and the article deadlines have been met, so best friends, Francie and June, ditch their business attire, grab their flip flops, and head to the lake for some fun in the sun.

Instead of enjoying a relaxing Memorial Day weekend at Kelleys Island on Lake Erie, this dynamic duo finds themselves in the middle of a murder investigation. They need to find out who burned down their friend's store, discover the identity of the charred corpse found in the wreckage, and clear Francie's husband, Hamm, before he is charged with the crime.

Fueled up with their favorite snacks of wine and cheese, these adventure-loving ladies manage to keep their eyes open for a bargain, come up with a plan, and even indulge in a bit of romance, all while dodging increasingly dangerous attempts to silence them for good.
Grab your sunglasses, your favorite cocktail, a copy of Sunny Side Up, and head to the lake with them for an unforgettable weekend adventure.

I located the gyrating devil under some discarded tank tops and swiped the answer button on the screen just before the call was switched over to voicemail. “Hello?”

“Francie! Is it a go? Did you get the hubby to agree to run us over to the island in the boat this weekend?”

“It’s good to hear from you, too, June. And no, I haven’t even gotten around to asking him yet. He’s downstairs whipping up one of his gourmet meals, and I sure don’t want to distract him from that. I was trying to figure out what I should pack. How do you prepare for freezing cold mornings, balmy afternoons, torrential downpours and high winds—and fit everything into one suitcase? At least I don’t have to worry about bathing suits. After the winter we’ve just had, the lake probably won’t warm up until August.”

“Sorry. I’m just anxious to get to the island. My editor is jumping down my throat to get this story in before the official start of the season.”

June’s passion was hard to resist. She was like that about everything she did—she took off running and didn’t look back. I could feel myself being lured in to the promise of fun and adventure. It wouldn’t be the first time.

My best friend was a freelance writer. She worked for a consortium of specialty magazines running the gamut from Fruit Aficionado to The Neighborhood Cigar, to my favorite, Lady Sings the Tools. Two years ago she gave up her high-profile job as an investigative reporter for WCLV, the major network news channel in Cleveland. After her divorce, she bagged up all her corporate outfits, chopped off her hair, and set off on a new career path that didn’t hamper her free spirit. Her new job now requires her to spend time with all kinds of interesting people from every walk of life instead of digging up dirt on the lowest of low-life criminals.

Recently, I even got to meet Christie Browne, the beautiful model, while June was working on a story about the latest beauty product the star was endorsing. In our enthusiasm to prove our support for the much-touted self-tanning lotion, we doubled the recommended amount as well as the recommended usage time. Our skin turned a frightening shade of burnt pumpkin, and wouldn’t you know it, I had to accompany Hammond to a formal dinner party given by his firm that same evening. June, on the other hand, was able to postpone her face-to-face interview, and by the time we met Christie, we both looked sweetly sun-kissed. She got rave reviews on her piece. I got put on a prayer list.

“I get that you’re under a deadline, but if I don’t approach Hamm in just the right way, I’m fried. Let me call you back in a little while.”

“Okay, but let me know soon. If I don’t take this assignment, I’ll be stuck documenting the mating behaviors of ferrets for the next two weeks.”