SPOTLIGHT: THE DUKE CONSPIRACY by Wendy May Andrews 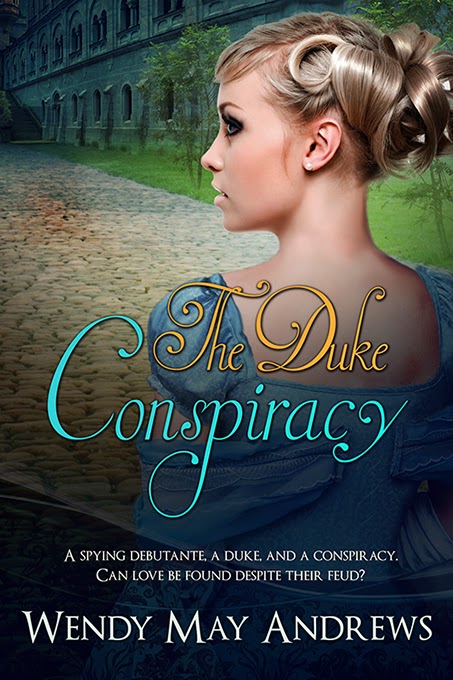 The Duke Conspiracy is a 96,000 word Sweet Regency Romance

A spying debutante, a duke, and a conspiracy. Can love be found despite their feud?

Miss Rosamund Smythe, the only daughter of a baron diplomat, is finding the Season to be a dead bore. After her stint at spying while in Vienna with her father, she wants a higher purpose in life than “just” being a wife.

His Grace, Alexander Milton, the Duke of Wrentham, wants a quiet life with a “proper” lady as his wife after the tumultuous childhood he had. His parents had fought viciously, lied often, and Alex secretly wonders if he was even his father’s son.

Rose and Alex grew up on neighboring estates and have been best friends since she was four years old but a family feud has torn their friendship apart.

At a Society event Rose overhears a plot to entrap Alex into a marriage of convenience. Her loyalty to their old friendship as well as her knowledge of the conspirator, Sir Jason Broderick, causes Rose to overcome her aversion to Wrentham in order to warn him of his danger. Alex’s complicated childhood has caused him to despise all forms of deception so Rose avoids telling him how she knows so much about Sir Broderick.

When Rose is abducted by Sir Broderick to prevent her interference, Alex must deal with his own conflicted feelings to help her rescue herself. Can they claim their happily ever after despite the turmoil?
Buy Links:Amazon: http://amzn.to/18YsbHKBarnes & Noble: http://www.barnesandnoble.com/w/books/1121452824?ean=2940151488785
iTunes: https://itun.es/ca/lpls6.l

Alex gazed at his old friend in admiration. If anyone had ever told him he would be standing in Burlington House surrounded by Elgin’s Marbles debating with Miss Rosamund Smythe about who might be conspiring to entrap him into marriage, he would never have believed such a claim. But here they were. And she looked mighty fetching as she gazed up at him expectantly. He had to make an effort to remember what she had said. Oh yes, something about ideas to investigate. He wondered absently what she could possibly know about investigations and clues and all that. But she was right. They needed to have a direction. The only trouble was he was drawing a blank about any possible ideas.

All he could do was shrug helplessly. “I am so sorry, Rose, but I have absolutely no idea where to start. To the best of my knowledge I have never had any dealings with Broderick. I developed an instant dislike of the man upon first making his acquaintance, but I cannot even tell you why, as we have barely conversed.”

The duke was clearly flabbergasted over this development and was even slightly ashamed to not have a ready solution. Rose must have realized this. She hastened to reassure him. “Never mind about that. We both agreed earlier that the best place for us to start is with Lady Anne. That will have to be my job, as you will just be walking straight into their plot if you try to do anything about it. Now, I really must be going, so we must hurry and establish another appointment to meet up to discuss any of our findings. In the meantime, you should speak to your solicitors or man of affairs or whatever you might have along those lines and see if they are aware of any issues Broderick might have with you. Those gentlemen might know more on the subject than you.”

“How did you get so smart about such things?”

Alex was intrigued by the blush that spread over her face at this unanswerable question. The only thing she could offer was “My father is a diplomat,” with as much dignity as possible.

Alex allowed the moment to pass and was rewarded by the look of relief on her face. He hurried to make an appointment as they saw her maid approaching. “Would it be remarked upon if you come here again tomorrow or the next day?”

“Probably not,” Rose answered. “My mother never rises before noon and is really only concerned with how I spend my evenings. But you had best give me at least one day to try to make the acquaintance of Lady Anne, so let us say the day after tomorrow. That gives me a day and a half to gather as much information as possible. I shall start with my friend Lady Elizabeth. She is a font of knowledge about the ton, as well as being friendly with Lady Anne.” While she was speaking she fumbled with her drawing supplies, finally tucking them under her arm. “Wish me luck,” she concluded as she once more faced the duke.

The duke watched a myriad of emotions chase themselves across his companion’s face. He was unable to identify most of them, but he thought she looked rather wistful as she offered him a brief curtsy before she hurried away without another word.

Alex stood in the same spot for several moments, watching her retreating figure, wondering if she would look back before exiting the building. He was unprepared for the profound disappointment that swept over him as she strode away with purpose, never once glancing back in his direction. Slowly bringing his focus back to the statue she had been sketching, the duke allowed the entire interlude to play itself out in his mind. Giving his head a shake to rid himself of the melancholy that had befallen him, he followed in her footsteps and strode from the hall. 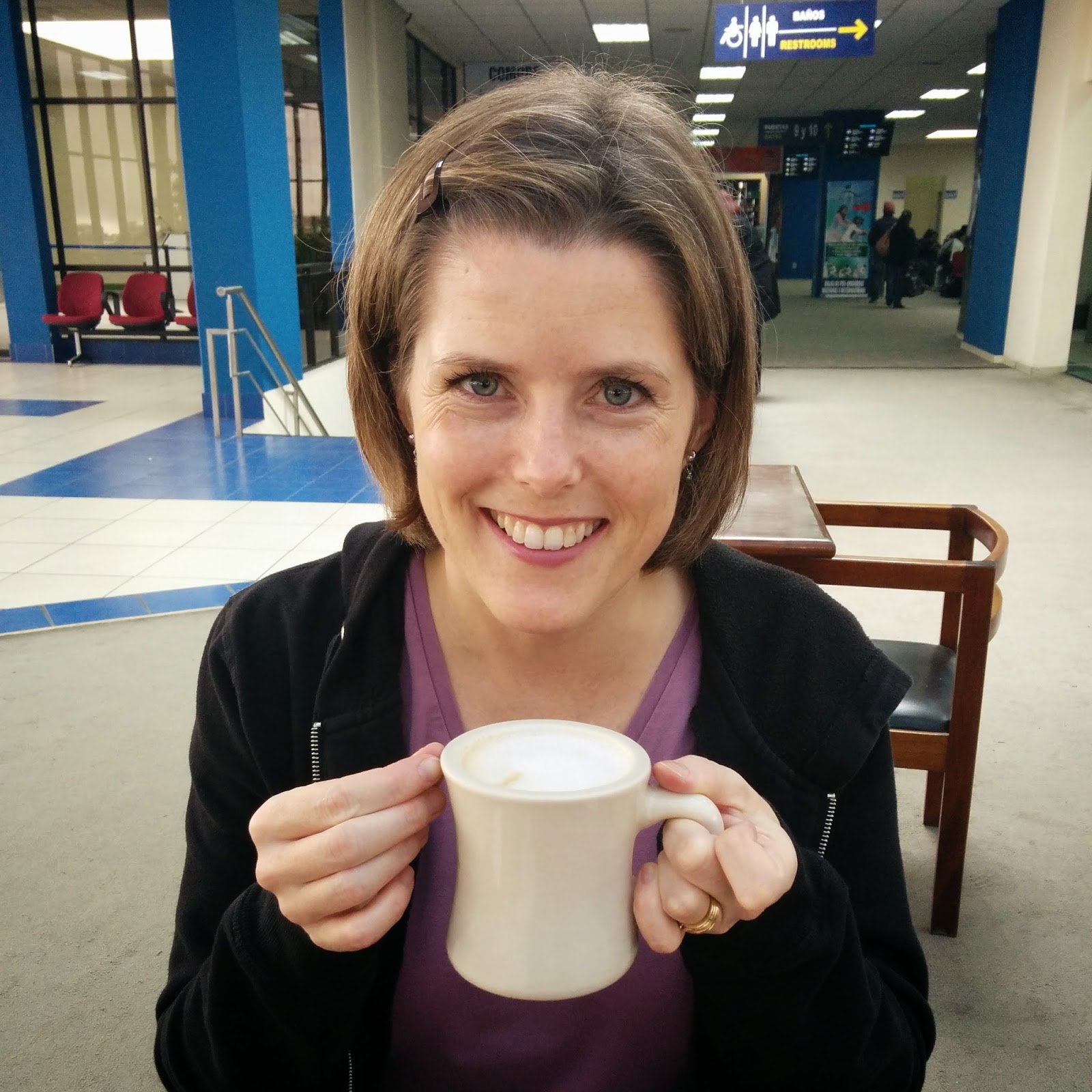 About the Author: Wendy May Andrews

Wendy May Andrews has been reading whatever she could get her hands on since the age of five. She has been writing for almost as long but hasn’t been sharing those stories with anyone but her mother until recently. Wendy lives in Toronto with her own real-life hero. When not writing or reading, they love to travel wherever the mood takes them.

10. All the Books I get to read in the name of Research – as the Regency era is my favorite period to read about, and a writer really must keep abreast of what is current on the marketplace, it could actually be considered a tax deductible expense ;-)

9. The Settings – Regency era England had spectacular decor and architecture. I find it a challenge to sufficiently describe these but they are a great pleasure and one of the reasons I love Regencies.

8. The Clothes – I am sure wearing all those layers regularly would be wearying today, but everything a Regency lady wore was so elegant. And there was a specific, appropriate gown to be worn for each occasion. A lady could change her clothes up to six times a day! Gentlemen, too, had elaborate, spectacular wardrobes. I would have loved to see that time with my own eyes. It is a pleasure to write about.

7. The Manners – the lords and ladies of Regency England had such impeccable manners. They were so proper and there were quite rigid rules involving any social interactions. But it’s so fun to read how the characters either circumvent these rules or accomplish their ends within them.

6. The Vocabulary – connected with the correct manners, Regency lords and ladies were very well read and had a much more extensive vocabulary than most people today. And they had hilarious expressions for things, like bosky, foxed, or disguised means drunk and blunt, brass, and ready refer to money.

5. The Conflicts – Since the Regency era also coincides with the Industrial Revolution there were so many changes taking place. Women were gaining rights, and many members of the ton were gaining or losing their wealth based on various inventions. It is a fascinating time period.

4. The Research – There are reams of information available about the Regency era. I spend hours researching. So many fascinating things were taking place politically with the Napoleonic wars and then all the negotiations when the war ended. Fashions were changing. Industrialization brought modern conveniences.

3. Jane Austen – really, need I say more? Who doesn’t love her? Austen’s writings were contemporary for her but they have stood the test of time.

2. The Excitement – Regency romances always hold such an edge of excitement. The lords and ladies were so sly with their speech. There are so many subtleties; most Regencies need to be read carefully to catch the nuances. The conflicts and developments of the times lead to many exciting twists and turns to the story.

1. Georgette Heyer – the number one reason why I love Regency Romances. Georgette Heyer, the godmother of the genre, was amazing. Her comedic timing and use of tension and conflict keep readers coming back for more. I love to read and reread her books over and over.