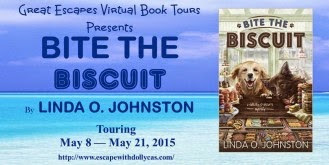 Synopsis
Carrie Kennersly, a veterinary technician, has become known for offering healthy and popular dog treats at the clinic where she works. When the local bakery’s owner moves away, Carrie jumps at the chance to convert it into the Barkery, a shop to make and sell her canine delights.

But Myra Ethman, co-owner of another pet product store, hates the new competition. At the Barkery’s opening party, she badmouths Carrie’s homemade dog biscuits, insisting she’ll find a way to shut the place down. So when Myra is found dead with a Barkery biscuit beside her, Carrie must prove she didn’t do it before she’s collared for murder.

Review
Vet tech turned entrepreneur for both a bakery and barkery, Carrie Kennersly has her hands full. The elite Ethman family of the town own a resort, hold seats on the council, and own a rival pet store. Myra Ethman and Carrie get into an argument and then Myra is found dead and Carrie is a suspect. She finds herself trying to clear her name by identifying other possibilities for the two cops on the case. In the meantime, she's still not sure the two assistants, Judy and Diana, can get past their differences and thwarted aspirations to own the bakery to work with her. Two possible romantic interests, one of whom also had conflict with Myra, add to Carrie's distractions and keep the story interesting.

The story line is well developed and Carrie as the protagonist is likable with both depth and believability. She has doubts but even while panicking thinks of donations for the homeless and the local animal shelter. There are a lot of secrets and possible suspects - Myra managed to make many people angry, including some of her relatives. The resolution makes sense but isn't obvious. I'll be looking for another in what I hope will be a new series. Bonus: a recipe for a dog treat and a people treat at the end!

About the Author Linda Johnston
Linda O. Johnston’s first published fiction appeared in Ellery Queen’s Mystery Magazine and won the Robert L. Fish Memorial Award for Best First Mystery Short Story of the year. Since then, Linda, a former lawyer who is now a full-time writer, has published more short stories, novellas, and 38 romance and mystery novels, including the Pet Rescue Mystery Series, a spinoff from her Kendra Ballantyne, Pet-Sitter mysteries for Berkley Prime Crime, and Harlequin Romantic Suspense as well as the Alpha Force paranormal romance miniseries for Harlequin Nocturne. She additionally writes the Superstition Mysteries for Midnight Ink.

Her latest cozy mystery series, the Barkery and Biscuits Mysteries also from Midnight Ink, kicked off this month with BITE THE BISCUIT.
** Photo by Dan Irvin Photography