Book Review: DEATH OF A BRIDE AND GROOM by Allan J. Emerson

When the body of writer Iris Morland is discovered in full bridal array atop a gigantic wedding cake parade float, the little resort town of Honeymoon Falls is left reeling. Not only is its reputation as "the Romance Capital of the World" at risk, its very survival is threatened. Murder, it seems, has a chilling effect on those considering venues for potential nuptials.

Iris enjoyed betrayal, which makes half the people in town credible suspects. Among them is her husband, Kenneth, whose faltering grip on a mechanical mouse plunged him into a hideously embarrassing scene with Iris and her latest lover, television host Arnold Reifel. Arnold was finding the affair burdensome, and his wife, Marjorie, was seething because Iris, not content with appropriating her husband, had turned Marjorie's interior decoration schemes into a very public humiliation. Then there's haughty French film auteur, Pierre Blondin, in town filming his adaptation of Iris's novel. Did Iris trigger his murderous wrath by opposing a nude scene featuring ninety-five-year-old actress Hermione Hopkins?

Captain Will Halsey, head of Honeymoon Falls' three-person police force, has to find the killer in the crowd of Iris’s enemies, while coping with small-town politics, feuding among his subordinates, and the ferocious attentions of the media.

What Other Writers Say:

"Packed with mystery, humor, romance, and an intriguing cast of characters. Anxiously awaiting the next in the series!" —Mary Daheim, bestselling author of the Alpine/Emma Lord and Bed-and-Breakfast mystery series.

"Murder's a funny thing sometimes, and never more so than in Allan J. Emerson's fun, fast-paced novel DEATH OF A BRIDE AND GROOM." —Alice Duncan, bestselling author of the Daisy Gumm Majesty series.

"Written with a delightfully wry humor and an eye for detail, this intriguing tale has an ending you won’t see coming. A totally fun read."—Kate Kingsbury, bestselling author of the Pennyfoot Hotel and Manor House mysteries.

"Fast and funny with a quirky cast of supporting characters bent on keeping their secrets. The Honeymoon Falls series is off to a great start!" —Tamar Myers, author of the Den of Antiquity mysteries.

"A sly romp with a likable police chief who’s trying to keep his force of two from killing each other as he solves the murders."—Elizabeth Zelvin, three-time Agatha Award nominated author of the Bruce Kohler mystery series.

Imagine a town with everything named along a wedding theme... you have to smile (or groan) at the street names even, but there is more humor in the story. Along with the wedding theme, romance is a given with honeymooners visiting this tourist attraction town, and the story comes through on that. When the two senior ladies trying to drive a huge wedding cake to the Wedding Daze parade staging area and cause a wreck, more than traffic citations are the result.  Little did the sisters know they had corpses as the bride and groom on top of that cake. Now Halsey and his two detectives have the chore of trying to solve the murder without looking completely incompetent.

This is a fun, quick paced, and easy read. A bit corny at times, with some predictable  parts, but enjoyable just the same. As the story unfolds, Iris is the victim that it's easy to want dead and the suspect list just continues to grow as Halsey interviews her various conquests and almost gets taken in by one of the suspects. The resolution? Not obvious, but believable in terms of the murder. Romances and relationships evolve. The characters - especially Halsey are likable without being perfect. I hope to see some of them in future books... 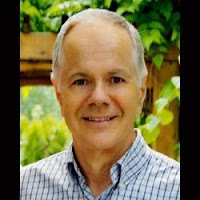 About the Author:
Allan Emerson is a Canadian writer who was born in Saskatchewan and brought up in small towns there and in British Columbia. He lived in Australia and New Zealand before settling on the west coast of Canada. As his mother could tell you, he's been making up stories since he was a little kid.
Death of a Bride and Groom is the first book in the Honeymoon Falls series. Although the town of Honeymoon Falls and all its inhabitants are purely fictional, the idea of marriage and murder in close proximity came to him when he was visiting Niagara Falls, and wondered about the lives of the permanent residents.