Creating a Series - Thumper, the Cat in the Black Cat Mysteries
Elaine Faber

The novel: Authors write from our hearts and can’t help but inject many of our own ideas, humor, personality, fears or interests into our characters, particularly the protagonist. Though limited to the physical capabilities of a feline, Thumper, the cat in the Black Cat Mysteries, is best described as having human emotions, thoughts, ideas, and knowledge. With this in mind, Thumper, therefore, is much of me.

As a POV character in Black Cat’s Legacy, Thumper has waited for someone to return to solve the cold case murder from 25 years ago at the lodge. With the aid of his ancestors’ memories, he points out clues to help Kimberlee and her associates solve the mystery. Of course, someone stands in the way and creates chaos. Throw in a bit of romance and intrigue, a touch of espionage and a smidgen of fantasy and you have a real page turner.

The sequel: The author engages in a clever dance, writing a sequel to create what happens next. Assuming a mixed audience of fans from our first book and new readers starting with book two, we must give enough of what happened before to understand why this and that is happening in book two without spoiling book one.

Thumper plays a bigger POV role in the sequel, Black Cat and the Lethal Lawyer. By meeting his soul-mate, Noe-Noe, a cream tabby with eyes the color or mustard and stripes the color of marigolds, he has opportunity for more POV scenes and humorous conversations. Set on a Texas horse ranch, Thumper must stop a killer bent on harming Grandmother, even though he doesn’t like her very much as she has her own wicked agenda.

The third in the series:  The third novel in a series must tie up all the loose ends within the three books, leaving the reader contented with the conclusion. As authors, we must answer all the questions satisfactorily and yet leave just the hint of a possible future plot.

In the novel, Black Cat and the Accidental Angel Thumper and Noe-Noe are left behind following an MVA. Thumper suffers a head injury and memory loss. For whatever reason, Noe-Noe says, “Call me Angel. I’m here to take care of you,” refusing to share their previous life. What follows is a journey where Thumper, now called Black Cat in their new home on an Emu farm, experiences a spiritual journey of human emotions that include fear, loss, grief, shame, faith, jealousy, despair and joy as he learns, with the assist of divine intervention, that there are more important things than knowing your own name. (yes…there is an angel)

What’s next? In spite of my intention that my journeys with Black Cat are finished, one never knows what tomorrow brings. After all, as the muse for his character, he still lives within me, kicking and screaming to get out, wanting to share yet another adventure, even as I turn my attention to another series set during WWII.
**** 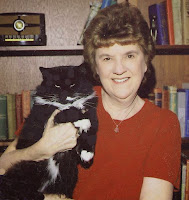 Elaine Faber is an active member of Sisters in Crime, Inspire Christian Writers and Cat Writers Association. Elaine lives in northern CA, with her tolerant husband and four house cats, including a tuxedo cat that looks a lot like Black Cat and three ferals that come to the back door night and morning looking for a hand-out! A portion of the proceeds from her Black Cat mysteries goes toward cat rescue organizations.

Black Cat (aka Thumper) and Noe-Noe are thrown from the car in their crate when their persons' car is hit and the door pops open.  Black Cat has a head injury and can't remember who he is or where "home" is, but Noe-Noe knows and won't tell him. As they try to find "home" they stow away in a truck and end up with John and his daughter Cindy. Cindy names them (appropriately) Black Cat and Angel. As the story unfolds it seems that Angel's notion that there is a reason they ended up with John and Cindy becomes more likely. Someone is threatening John and trying to make him give up his ranch.

In this third book, the point of view (POV) is not only Black Cat's, but also Angel's. Their discussions and problem-solving as well as Black Cat's male perspective countered by Angel's has a very human feel. Faber does a great job of weaving the conflicts between them - Black Cats desire to remember and find his persons, and Angels seeming reluctance - as well as painting a number of plausible suspects behind the threats to John and Cindy. I've read all three, and this is by far my favorite.
Posted by Christa Nardi at 12:00 AM