Synopsis
A murder at the local hockey rink leaves photographer Callie Cassidy nursing a few injuries of her own, but that won’t stop her from trying to catch the killer—before someone else gets iced… 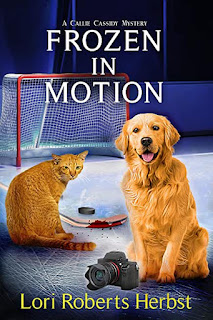 When hockey coach Renata Sanchez asks for Callie’s help getting her annoying ex-husband to leave Rock Creek Village, Callie hesitates. After all, Renata’s brother, Detective Raul Sanchez, has been known to bristle at Callie’s interference. But with her own second-chance romance on rocky turf and her best friend’s engagement to a man Callie doesn’t entirely trust, she could use the distraction of an investigation.
Before she can even begin her research, a confrontation between Renata and her ex erupts right outside Sundance Studio. Later in the day, the man literally drops dead, falling from the hockey arena catwalk and landing with a thud on top of Callie. Renata immediately takes top spot on the suspect list, with her boyfriend Ethan MacGregor not far behind. With time running out to save her friends, Callie must enlist the help of her inquisitive cat and her loyal golden retriever to develop a picture of the true culprit.
Review
The suspects abound for Callie and much to her dismay, Renata is at the top of the list. Her brother, Raul, is sufficiently concerned - and shut out of the investigation - that he joins forces with her. Then there's Ethan, and Theo, not to mention Raul himself. Add in two dogs, a cat, the man who maintains the hockey rink, and a few others who've had altercations with Renata's ex. While trying to prove Renata is innocent, Callie also has to deal with her own romance with Sam and a rough patch, her photography studio and gallery, and her missing camera. To top it off, she sticks her nose into her best friend's business causing more problems.
The pace is steady and there are some more humorous moments along with tension on multiple levels. Small town setting, with the coffee shop and interesting owner with surveillance to capture all that's going on. The main characters are interesting and likable. This is my first in this series. It was easily read as a stand alone mystery, though I always recommend starting a series at the beginning. If you like cozy mysteries, you'll enjoy this one.
FTC Disclosure: I received a complimentary copy of this book in the hopes that I would post an honest review. This has not affected the content of my review in any way.
Books in the Callie Cassidy Mysteries
Suitable for Framing (Book 1)
Double Exposure (Book 2)
Frozen in Motion (Book 3)
Leave a comment and a random commenter will receive a free book of their choice!
About Lori Roberts Herbst Lori Roberts Herbst lives in Dallas, Texas, but spends a lot of time when she should be writing staring out the window and wishing she owned a home in Colorado mountains, too. She is a wife, mother, grandmother (gasp!), former journalism teacher, former counselor, and cozy mystery author. Lori serves as secretary of the Sisters in Crime North Dallas chapter and is a proud member of the SinC Guppies and the Mystery Writers of America.
You can follow Lori on:
Facebook, Goodreads, and BookBub. Subscribe to her newsletter at www.lorirobertsherbst.com for updates and freebies.