Book Review: TO KILL A LABRADOR (A Marcia Banks and Buddy Mystery Book 1) by Kassandra Lamb

Synopsis
Marcia (pronounced Mar-see-a, not Marsha) likes to think of herself as a normal person, even though she has a rather abnormal vocation. She trains service dogs for combat veterans with PTSD. Then the ex-Marine owner of her first trainee is accused of murdering his wife, and Marcia gets sucked into an even more abnormal avocation–amateur sleuth.

Called in to dog-sit the Labrador service dog, Buddy, she’s outraged that his veteran owner is being presumed guilty until proven innocent. With Buddy’s help, she tries to uncover the real killer. Even after the hunky local sheriff politely tells her to butt out, Marcia keeps poking around. Until the killer finally pokes back. 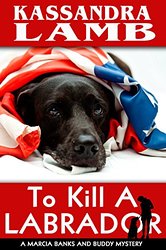 The ex-Marine with PTSD and the murder of his wife set the stage for Marcia to somehow feel responsible not only for the therapy dog she trained, but for Jimmy as well. There are twists and turns and characters are not always as they seem initially.

Marcia's curiosity and outrage at the stereotypic response to the veteran lead to some interesting interactions while working with Buddy's despondence over his change in placement, her continued training of Lacy and Max, and the surprise in her living room. Then there's the hunky local detective and Marcia's hesitancy to engage in the possibilities there.

Well-written, with well-developed characters make for an enjoyable read on many levels. TO KILL A LABRADOR is bound to capture the interest of many.

AMAZON LINK
Posted by Christa Nardi at 12:00 AM