Blog tour and Review: FOUR CUTS TOO MANY - A Sarah Blair Mystery by Debra H. Goldstein

About the Book
Sarah Blair gets an education in slicing and dicing when someone in culinary school serves up a main corpse in Wheaton, Alabama
Between working as a law firm receptionist, reluctantly pitching in as co-owner of her twin sister’s restaurant, and caretaking for her regal Siamese RahRah and rescue dog Fluffy, Sarah has no time to enjoy life’s finer things. Divorced and sort-of dating, she’s considering going back to school. But as a somewhat competent sleuth, Sarah’s more suited for criminal justice than learning how many ways she can burn a meal. 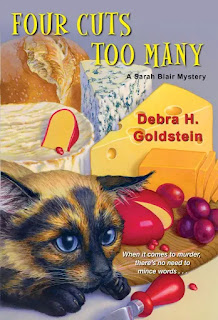 Although she wouldn’t mind learning some knife skills from her sous chef, Grace Winston. An adjunct instructor who teaches cutlery expertise in cooking college, Grace is considering accepting an executive chef’s position offered by Jane Clark, Sarah’s business rival—and her late ex-husband’s lover. But Grace’s future lands in hot water when the school’s director is found dead with one of her knives in his back. To clear her friend’s name, Sarah must sharpen her own skills at uncovering an elusive killer . . .
Includes quick and easy recipes!
Review
When it comes down to it, not many people were fond of Dr. Martin, the victim. Sarah wants to believe Grace is innocent and works to sort out other possibilities with Rahrah, Fluffy, and her twin sister, Emily.  The most obvious motive is with the least likable character, Jane, who is trying to save her business by establishing a partnership with the college and Dr. Martin is the only one admitting he's not in favor. As Sarah finds out more, though, Jane is not the only one and the suspect list grows.
There are positive relationships, conflicts, twists and turns, and a surprise reveal of the killer. I really liked the relationship of Wanda with Kait and the way Kait's mild dementia was handled. The jello activity was very creative.
The pace was steady and kept my interest. This is the fourth in the series, but can be read as a stand-alone. As always, I recommend you start at the beginning, though. If you like the others in the series, you are sure to enjoy this one.
FTC Disclosure: I received a complimentary copy of this book in the hopes that I would post an honest review. This has not affected the content of my review in any way.
About the Author

Judge Debra H. Goldstein writes Kensington’s Sarah Blair mystery series (Three Treats Too Many, Two Bites Too Many, One Taste Too Many). She also authored Should Have Played Poker and IPPY Award-winning Maze in Blue. Her short stories have been named Agatha, Anthony, Derringer finalists. Debra serves on the national boards of Mystery Writers of America and is president of SEMWA. She previously was on Sisters in Crime’s national board and president of SinC’s Guppy Chapter.
Find out more about Debra and sign up for her newsletter at https://www.DebraHGoldstein.com.
Follow her on Twitter (@DebraHGoldstein), Bookbub, and Facebook
Purchase Links
Amazon   B&N   Kobo   Google Play  IndieBound
a Rafflecopter giveaway