SYNOPSIS
There are sightings of a woman and a mountain lion near Lockleer Mountain, seen at moments of crisis. Is she the legendary Native American’s Spirit Woman, sent to protect the community? Nate is convinced his sister, missing for three months, and surely suffering from amnesia, is the elusive woman. He fears she will not survive the coming winter months, living wild in the wood with a mountain lion.
While Deputy Nate Darling pursues a relationship with Lou Shoemaker, he and Sheriff Peabody pursue a drug dealer, selling to the youth at the Native American reservation. Things are even more complicated by civil unrest regarding the government’s secret plans to build a mysterious facility, a big box store, and a housing tract close to Lockleer Mountain, threatening the livelihood of the local merchants. 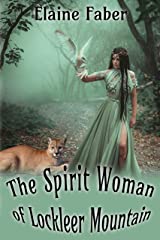 Is there any hope that the Spirit Woman, real or imaginary, can bring harmony to the troubled community? Will Nate be able to apprehend the drug dealer, locate his missing sister, maintain his budding romance, and guarantee the financial future of Lockleer Mountain?
REVIEW
The community of Lockleer Mountain, where Lou and Nate and others live, has been unsettled for several months, after a car accident left Nate's twin, Suzanna, missing. Despite the odds, Nate holds on to the belief that she's alive. The community is near a reservation and stories of the Spirit Woman and her lion have been shared and retold time and time again. Only now multiple people believe they have seen the lion in a fog followed by a flash of green, possibly the Spirit Woman. In most cases, the sighting results in stopping something bad from happening. Then there's the owl Lou nursed back to health and the superstition that seeing an owl is a bad omen.
The Spirit Woman, the owl, and the lion not withstanding, someone is leaving Suzanna's best friend, Judy, gifts on her farm and Suzanna is still missing. There's indications of drugs in the high school and a possible new military installation coming to ruin their close knit community as well. All the different pieces make for an interesting read and Faber pulls them altogether in the end. The pace is steady with several subplots and the presence of the lion, Spirit Woman, and the owl adding a novel dimension. An enjoyable read for lazy afternoons.
FTC Disclosure: I received a complimentary copy of this book in the hopes that I would post an honest review. This has not affected the content of my review in any way.
AMAZON
Posted by Christa Nardi at 10:00 PM