It's Christmas in July and time to reveal the cover for the next Stacie Maroni mystery, Holidays, Hijinks & Murder! Release is planned for mid-August as I work on the finishing touches and get feedback from beta readers. Don't want to wait? If you'd like an Advance Reader Copy (ARC), contact me! 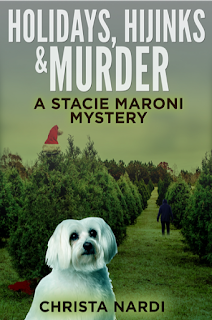 Deck the halls until the shots rang out. The attempt
to get Stacie in the holiday spirit falls flat when someone shoots Santa’s elf. As Stacie and friends help the elf and deal with the potential witnesses, one man stands out, in an old wool coat, the lapels blocking his face. Ignoring police demands, he disappears into the crowd only to reappear at strategic times. When the elf recovers and Santa is killed, the initial motives go up in smoke and the search is on for the true motive. With upheaval in her relationship and a killer on the loose, Stacie embraces her "bah humbug" perspective as she considers the mall Santa set up and his murder. Enjoy this cozy holiday mystery with Stacie and her friends to get you in the holiday spirit.

Here's an excerpt (though some edits are still to be made):