Book Review: A CHRISTMAS IN MONTANA Embers on Ice Book 1 by Elysia Strife 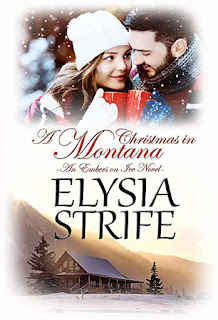 It's hot in Texas - very hot! I took a break from the heat with a little Christmas in July and a bit of romance ...

Orion McNalley has a heart the size of Texas—and a temper to match.
Years in service and living alone have made Matt Jefferson one callous man.
Will the spirit of the season bring them together?
Or will the secrets they hold inside keep them apart?

When a surprise letter arrives from Matt's mother, it leads him deep into a snowy world of holiday magic and Irish fire that threaten to crack his shell.

Filled with holiday humor, tempers, sweet romance, and lots of food, Orion and Matt rediscover what it means to have hope, faith, love, joy, and a belief in something greater than themselves.

Some language and violence.

Orion is divorced and after her relationship with Boone has a definite "no dating" policy. She works as a bartender and enjoys her sleepy town where everyone helps everyone else. The daughter of a famous body builder, she's no slouch and can hold her own, competed herself. It's the holidays and her good friend is coming to visit and she's already seen the writing on the wall. He wants more than friendship and she knows better. Then there's Matt. A stranger in town, ex-military and fighting his own demons. He's inherited a family cabin in the sleepy town and what better place to hide?

Snowstorms and other factors bring Matt and Orion together. There's a lot going on, but Orion and Matt are able (with a little nudge from Orion's parents) to let down their walls at least enough for Matt to decide he'll figure out how to work from the small town rather than returning to the city life. Probably more realistic than many HEAs, there's no big engagement or wedding. Both are cautious and, as suggested by Orion's dad, they're going to date first. There's also the bullet Boone left in her jacket as unfinished business.

This is the first in a 2-book series. I enjoyed the first enough to purchase the second, but readers should be aware that their relationship and the threat of Boone are left hanging. If you want the happy ending with all the resolution, you'll need to read both books.

A Christmas in Montana
Wildfire (Embers on Ice #2)
Posted by Christa Nardi at 12:00 AM