Book Review: A KINK IN THE ROAD : A Deadline Cozy Mystery #7 by Sonia Parin 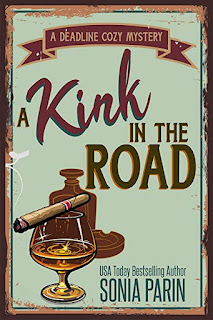 Eve’s new inn is about to open, with or without a name. As a new local business owner, Eve thinks it would be a splendid idea to attend a local town meeting. Little does she know she’s been excluded from them for a good reason. She’s been labeled a troublemaker. Now there is a new resident in Rock-Maine Island and she’s been warned to stay away from him.

One look at William Hunter the Third is enough to convince Eve she wants nothing to do with the man. Despite everyone’s efforts to keep Eve away from him, the inevitable happens and he lands on her doorstep.

To make matters worse, the billionaire brings along an entourage which includes his ex-wives, his friends and… a killer.

There have already been two deaths at the house she’s turned into an inn. Another death makes it three. Thinking disasters come in threes, she hopes this will complete the cycle. But what if she’s on a treadmill and doomed to play host to murder and mayhem? The town will surely rise up against her…

As advertised this cozy mystery has quirky characters and humor. Eve is convinced that something will go wrong and her best friend, Jill, is there to keep watch and be sure Eve is accused of the murder that hasn't happened yet, and then once the billionaire's assistant is murdered, to keep her out of trouble. Both women are dating police officers, and Jack and Josh do their part to keep a lid on the situation. Only the entourage comes with it's own quirky characters, the billionaire included, not to mention Mira and her editor, and Elsie who eventually vows not to publish anything she and her side kick have witnessed. A

The story is fast paced with twists, turns, and false leads galore. No one liked the victim and he seemed to have something on everyone associated with William Hunter III. Although this is the 7th in the series, it can be easily read as a stand alone. If you like cozy mysteries with a humorous side to murder and quirky characters, you'll enjoy this one, and probably the rest of the series as well.