While "sheltering in place," I'm  reading a wider range of books. This one is romantic suspense, definitely not a cozy mystery. 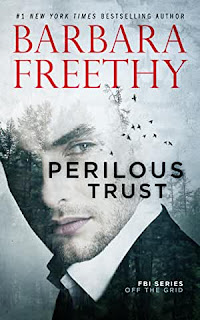 It was one dark night that brought Damon Wolfe and Sophie Parker together. They were two tortured souls, looking for escape, and they weren't supposed to see each other ever again…

Four years later, Sophie's FBI father, who is also Damon's mentor, is killed in a suspicious car crash after leaving Sophie a cryptic message to trust no one from the agency. When Damon shows up looking for her, she isn't sure if he's friend or enemy, but she knows he could easily rip apart what is left of her heart.

The last thing Damon wants is to get involved with Sophie again. It was hard enough to walk away the first time. But she's in trouble, her father's reputation is under attack, and the lives of his fellow agents are at stake if there's a traitor in their midst.

When someone starts shooting at them, they have no choice but to go on the run and off the grid. Everyone in their world becomes a suspect. They want to uncover the truth, but will it turn out to be the last thing they expect? Proving her father's innocence might just cost them their hearts…and their lives…

A romance that never went anywhere and his allegiance to his mentor serve as motivation enough for Damon to ensure Sophie's safe when she can't be found. It quickly looks like something is wrong and his feelings for Sophia take over. She's not sure who to trust and her father's last words were to not trust anyone, especially anyone in the agency.

This is a fast paced, active story. The plot moves along with secrets and clues revealed gradually, almost as if Freethy is teasing the reader. Sophie and Damon are both likable characters. You want this to work out well for them both, despite the obstacles. If you like romantic suspense, drama, and action, you will like this book. Only be sure to allow enough time to read it all at once, or you might lose some sleep to finish it. I did. With continued "stay at home" time, I'm onto #2 next.

This is the first in a new series by Barbara Freethy featuring FBI agents working Off the Grid.  The full series is below: