Blog tour and Review: MURDER IN THE SECRET MAZE A Tory Benning Mystery by Judith Gonda 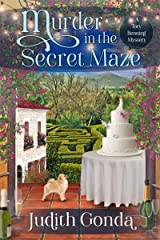 Landscape architect Tory Benning knows the lay of the land, but she’ll have to dig through the clues to unearth a killer . . .

After a whirlwind romance and a glorious wedding at the luxurious Hotel Santa Sofia, Tory Benning is ready to let down her hair, slip into her dancing shoes, and celebrate—until she discovers that her newly minted husband has vanished. The police suspect cold feet and second thoughts are behind Milo’s disappearance, but Tory’s certain he’s met with foul play. And since she designed the plush resort, she knows every nook and cranny of the grounds and adjoining secret maze, and wastes no time delving into her search.

As clues begin to emerge that Milo may have taken his last breath in the maze, Tory steps up her sleuthing, even as she learns she’s the prime suspect of a cop with a chip on his shoulder and is squarely in the sights of a menacing stalker. And when a second body is found on the grounds, Tory fears she’s up against a killer determined to silence any and all who get in the way. .

Not to be deterred, Tory forges ahead, navigating a case with more twists and turns than the maze itself, until the labyrinth of clues leads her to shocking revelations about her husband, her family, and the identity of a killer who’s dead set on making her the next victim . . . .


Suspects abound and the body count rises in the aftermath of the "I do's" and not-reception. Tory Benning designed the landscaping of the Hotel Santa Sofia, including the very eerie secret maze. She knows her way in the maze more than the average person. While that helps her in her search for her husband of only minutes, it also adds to the suspicion cast her way. Something is definitely not as it seems and at each turn information contradicts what she thinks and knows.

First off, I would love to see the grounds Tory so meticulously brought to life. The grounds sound beautiful. I tend to agree with her friend, though, about the maze's creepiness in the darkness. This story is well developed with many twists that eventually come together in a believable, yet surprising, way.

Tory is a likable character. Unfortunately, Milo, now dead, also was a highly likable character. However, there are many other supporting characters, including an investigator looking into the case for her and her best friend. On the other hand, there's the cop who Tory rebuked in high school who has her in his sights for the murderer, with hopes of the arrest getting him promoted.

The story moves along well, with enough tension and action to maintain attention. This is the first in the series. I'll be looking for the next installment.

Judith Gonda is a mystery writer and Ph.D. psychologist with a penchant for Pomeranians and puns, so it’s not surprising that psychology, Poms, and puns pop up in her amateur sleuth mysteries featuring landscape architect Tory Benning.