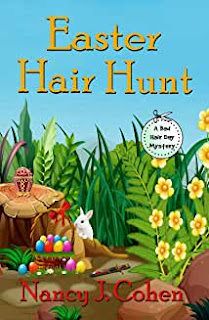 Synopsis
Hare today, dead tomorrow… Can a stylish sleuth pull a rabbit out of her hat to solve an Easter murder in this to-dye-for cozy mystery?

When hairstylist Marla Vail attends an Easter egg hunt at historic Tremayne Manor, she’s only there to fix hair for a client, Bonnie “Blinky” Morris. But when she’s asked to comb the grounds for leftover goodies, Marla discovers more than just a few dyed eggs. The dead body in the bunny costume is definitely not having a good hare day. And Blinky seems to have disappeared down a rabbit hole.

When trying to solve a murder, everyone needs a friend who’s all ears. For Marla, that’s her husband, homicide detective Dalton Vail. They make an eggcellent team. Dalton isn’t the kind to leap to conclusions, but with his wife seven months pregnant, and knowing Marla finds crime-solving to be irresistible, he worries about her running off on another hare-raising adventure.

Marla’s peeps are hoping for a happy ending, but she may have found a basketful of trouble this time. Can she crack the case before Blinky becomes the next victim?

Marla's task of collecting any missed Easter eggs or goodies goes south quickly when she finds a man in part of a bunny costume, dead. The costume he's wearing is the one her friend Blinky was wearing only a few minutes before. And the egg she finds nearby is none other than a Fabergé. She discovers that Tremayne Manor and Lacey Tremayne have a rare collection and security. Only no one knows where Blinky went or how the Fabergé egg ended up in the grass or what happened to the security tape.

Worried about her friend, not to mention her own curiosity, Marla gets very busy following clues and jumping to conclusions. Dalton and Tally and other friends keep her grounded and mindful of her pregnancy. Marla continuously points out that she won't be crime-stopping once the baby arrives. There are expected and unexpected twists and turns as the story unfolds.

This is the 16th in the Bad Hair Day Mysteries and Cohen has done it again with steady pace and characters who have depth and personality. She does not disappoint. I'm wondering if Marla will really bow out of sleuthing after the baby is born.

FTC Disclosure: I received a complimentary copy of this book in the hopes that I would post an honest review. This has not affected the content of my review in any way.
Posted by Christa Nardi at 12:00 AM