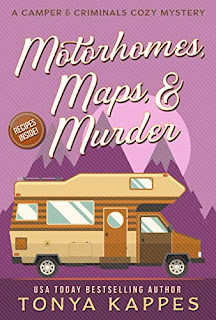 Welcome to Normal, Kentucky, where nothing is . . . NORMAL!

Mae West, owner of Happy Trails Campground, never thought she would become an actress like her namesake. Calling herself an actress might be far stretch as she plays a minor role in the local Civil War reenactment BATTLE AT CAMP WILDCAT.

When the reenactment doesn't go as planned, not one but two of the town's folks aren't playing dead. . .they were MURDERED!
Come to find out there was a prison break and the serial killer is believed to be in Normal and someone has stolen a motorhome from Happy Trails Campground.

Mae lets boyfriend and hunky detective, Hank Sharp, follow all the leads about the murders and on the trail of the serial killer because she's got bigger s'mores in the fire.

The motorhome owners have filed a lawsuit and suing her for the deed to Happy Trails Campground. Mae has embraced Normal and there's nothing or no one going to take her campground. She's determined to find the motorhome and return it to the owners before she hands over any deed to anyone.

Mae just might find out that tapping into her namesake just might come in handy when coming face to face with a serial killer.

Mae West is doing her best to keep the campground in Normal thriving. Only the escape of a serial killer amidst a civil war reenactment and residents not too thrilled with Greaser having stayed there...  Then a motorhome is stolen - a first to be sure. The map and wig add to the story.

The characters are what make this series and this story come alive. Mae is not always the most logical and there are some comic moments as well as good vibes with Hank. Mae does what she has to do and has to think quickly as only Mae West might. The story moves along at a steady pace with enough twists and turns to keep it interesting. This can be read as a stand alone mystery. If you like cozy mysteries or others in this series, you won't be disappointed.