No time is ever good for a family emergency, 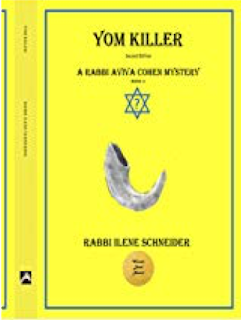 but for a rabbi the period just before Yom Kippur is especially difficult. Yet even though the Holy Day is approaching, Rabbi Aviva Cohen rushes off to Boston to be at the bedside of her mother, who was found unconscious in her apartment at an assisted living facility. The big question is: was it an accident or an attack? The search for the truth uncovers everything from old grudges to family secrets to fraud - and possibly murder.

New owners of the assisted living setting and a growing concern with the rash of elderly who are dying. Natural causes? Rabbi Aviva Cohen and her ex-husband detective drive after the call that her mother is unconscious. As you might expect, things don't seem to add up. Another resident tells Aviva that her mother was typing up notes on something and she is looking for them, and then her mother's room is ransacked. Add in the niece hacker who now works for the FBI and taught the woman how to hide her files and back them up on thumb drives, the realization that the resident trying to find the notes is the same woman with a shady past with the family, and the pieces start to fall together.

What makes this a cozy mystery worth reading isn't that there are elderly people with no family members dying with unknown causes. What makes the story is the characters. Rabbi Aviva Cohen is a no-nonsense, and not the most religious, woman. She's a strong character, yet has issues - especially with her ex-husband wanting to get back together. There is family conflict, secrets revealed among family members, and, of course, the mystery. The twists and turns as Aviva searches for answers with the occasional miss-step keep the pace steady and yield a few laughs. There isn't a lot of religion and you don't have to understand Judaism to appreciate the story. Yom Killer is the first in a series of three.