Is this the end for PI Jarvis Mann? 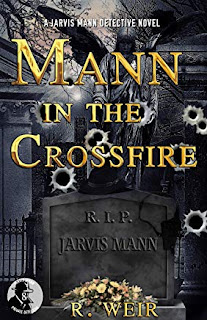 A surprising murder of an associate sends Jarvis on a trip to San Diego to investigate. A trail of clues direct him to a gang member who wants him eliminated, while a local detective agency is hot on his tail with nefarious plans of their own. Battered and beaten, Jarvis battles to forge on, tracking the evidence and directing him to a dangerous discovery that he may not be able to fight his way out of. Desperate for backup, with nowhere else to turn, he enlists lethal foes to render essential aid. Will these illicit associations spell the end of his career and possibly his life…

For Jarvis is truly a Mann in the Crossfire.

Jarvis has calmed down some, with nightmares still from the Front Range Butcher. His attorney and friend Barry has him checking out a cheating husband and Jarvis gets the goods and then some. Then out to San Diego to finish what his friend Rocky couldn't do - killed in a boat bombing like his wife and son. The plan is find out who put out the hits on Rocky and his family, when Rocky decided to try for a more "legal" and safe lifestyle. Somehow, as he recovers from one beating, the idea of a safer lifestyle resonates with Jarvis.

As with the others in the series, Jarvis Mann's sense of humor and sarcasm add to the story line. The pace of the story keeps time with the tensions and revelations, and the wait time for the key players to come forward. There are lots of pieces that need to come together to determine who ordered the hit on Rocky and his family, with drugs and gun running, and a few political comments as well. Throughout it all, Jarvis is a bit nostalgic, recalling his previous actions. Is there a future for Jarvis Mann? Not for me to say.

If you've liked the others in the series, you'll like this one. I dare say, I liked it better than the Front Range Butcher. First Jarvis Mann? It is a stand-alone mystery, but you'll like it better if you read at least some of the others, for context, first. For those of you who prefer clean reads and cozies? Pass on this one. This is a hard-boiled mystery with adult content.


Check out the rest of the Jarvis Mann Detective series:


The Case of the Missing Bubble Gum Card
Tracking A Shadow
Twice As Fatal
Blood Brothers
Dead Man Code
The Case of the Invisible Souls
The Front Range Butcher
Mann in the Crossfire
Posted by Christa Nardi at 12:00 AM