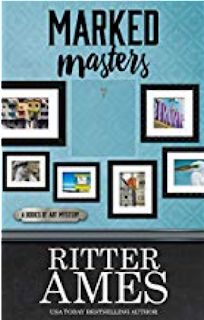 Laurel Beacham made working solo a personal success story and is known for her nerve, instincts, and ability to do whatever necessary to return each priceless masterpiece safely intact. As the world’s leading art recovery expert, she’s thwarted more heists than the average law enforcement professional. Museums applaud her skills. Thieves admire the cunning way she operates.

Her last job landed her the head position over the London branch of Beacham Foundation, but bringing one case to a close only opened a bigger one. More importantly, the new case inextricably ties her to Jack Hawkes, a man smart enough to be her equal but who keeps her trust meter firmly in the red zone. Trying to stop a rumored heist of the century, the pair leap headlong into a plot that gets more dangerous and illusive by the minute. The clock counts down as the bodies and forgeries stack up.

Laurel is an art critic with a very interesting sideline - she reclaims stolen art but not through the usual channels. She much prefers to work alone, but she is forced to work with Jack, who infuriates her. He wants it all his way and that is an obvious trait she can take issue with, but she also has developed feelings for him. Laurel has some trust issues that are great for her job, but not so great for building relationships. And Jack is as slippery and cunning as can be.

Ames has created a complicated plot with twists and turns taking the reader from Florida to London and on to Florence. This could be read as a stand alone, however, there are references to the first in the series so you might want to start there. Bottom line? If you like other works by Ames, you will definitely like Marked Masters and likely the others in this series.