As an ex-star of a hit teen detective show, Maizie Albright gets the youth demographic. Or so she thought. Now that she’s adulting, today’s kids make Maizie feel out of date. At least the youth she meets while doing community service at Black Pine’s exclusive healing resort, the Wellspring Center. When these teens aren’t vlogging their attempts to track down Big Foot, they’re trying to prove the Center is up to no good. Starting with the disappearance and possible murder of their not-as-young commander. A murder the police find as likely as Big Foot. 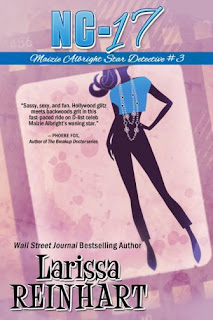 Wait, not man of her dreams.
Boss of her fantasies. Professionally speaking, of course.

Maizie's running around in circles with her past, present, and wished for future with Nash keep colliding. Add in Lamar, donuts, and three teens who are in search of Big Foot and their missing friend, and Maizie's got a very long to do list. Maizie's attempt at investigating Chandler's disappearance and the bank bomber's accomplice, intersect in interesting ways with her probation officer, mandated therapy, and Oliver, who is the reason she's on probation to begin with - and her mother who is marrying her other ex-boyfriend. No wonder she keeps having panic attacks.

It's hard to read this story and not feel for Maizie and her attempts to please Nash and find Chandler for the teens. This is well written and another fun read by Larissa Reinhart with interesting characters and tension that keeps the pace steady.

FTC Disclosure: I received a complimentary copy of this book in the hopes that I would post an honest review. This has not affected the content of my review in any way.
About the Author

Larissa’s family and dog, Biscuit, had been living in Japan, but once again call Georgia home. See them on HGTV’s House Hunters International “Living for the Weekend in Nagoya” episode. Visit her website, LarissaReinhart.com, and join her newsletter for a free short story.