Julienne is snow bound in the middle of the Rocky Mountains with a killer striking at will.

Julienne LaMere gets to attend a Resort Management conference at a prestigious ski resort in the Colorado Mountains. What should be an enjoyable getaway attending workshops by day and shopping and enjoying the resort by night comes to a screeching halt when a loud-mouthed guest is murdered plus the roads and town shut down for an epic blizzard. 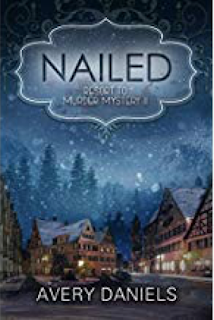 In addition to attending the conference, dodging a smitten teen boy, and seeking clues among the gossiping - and increasingly tense - guests, her best friend’s heart has warmed to an unlikely man and may get broken. As if her mind isn’t already fully occupied, Julienne and her new boyfriend Mason are skiing down troubled slopes in their relationship. Will Julienne put the scant clues together and unveil the culprit before a murderer gets away?

Julienne is at a prestigious, German style ski resort, as part of her training in management. A heated argument in the dining room, another argument in the lobby, and Kara Caine is found dead in the snow - and the snow keeps falling and falling. Roads closed and they're all trapped in the resort - with the killer.

Along with her friend, Porsche, Julienne brings together her own cadre of irregulars to collect information and help identify the killer. The lead detective, Johan Larson, is stretched thin and doesn't discourage her collecting information. Things get a bit more dicey -both with Mason and Julienne avoiding his calls - and the killer. Some how, Julienne manages to be in the wrong place more than once.

I enjoyed the characters - especially the teen with a crush on Julienne, Porsche, and Johan. Certainly, the victim was not likable and that's a good thing. It's not obvious just who the killer is until the end; however, it makes sense. This is the second in the series, only released in March 2018, but can easily be read as a stand alone mystery. Can Porsche's sudden love survive? Mason? I guess we have to wait for Book III.