Blog Tour and Review: MURDER, SHE REPORTED by Peg Cochran

Manhattan, 1938. Tired of being trapped in the gilded cage of her family’s expectations, Elizabeth Adams has done what no self-respecting socialite would think to do: She’s gotten herself a job. Although Elizabeth’s dream is to one day see her photographs on the front page of the Daily Trumpet, for now she’s working her way up as the newsroom’s gal Friday.

But fetching coffee isn’t exactly her idea of fun. So when veteran reporter Ralph Kaminsky needs a photographer to fill in for a last-minute assignment, Elizabeth jumps at the chance. At the Waldorf Hotel, Elizabeth is tasked with tracking down the season’s “It girl,” Gloria DeWitt, who will be making her society debut. Working her own connections to New York’s upper crust, Elizabeth manages to land an exclusive interview with Gloria.

Then Gloria’s stepmother is shot dead in a Waldorf bathroom, placing Elizabeth at the scene of a headline-worthy scandal: “Murder of a Society Dame.” Now Elizabeth will have to get the scoop on the killer before her good name gets dragged through the gossip columns—or worse. . . .


Murder She Reported is well-written and an enjoyable read. With debutantes and high society of 1938, the main character of Elizabeth captures the conflict of women of any means in the thirties, when women didn't work outside the home. For women like Elizabeth, raised in the life of luxury, going to work - especially taking photographs of crime scenes and dead bodies - is far from the norm. High society pressures and her parents war with her desire to be independent. The longer it takes for the killer to be caught, the more precarious her predicament and potential negative effects on her social standing.

Elizabeth isn't perfect - she has doubts and wants to live in both worlds, but definitely not with the flat, boring men being paraded for her. She's a likable young woman - even the curmudgeon crime reporter, Ralph Kaminsky, appreciates her talent and sense, and gives her a different perspective as he drags her into dark, sleezy bars. I also liked the detective on the case. Anyone who enjoys mysteries set in this time period, will enjoy Murder, She Reported.

As with other mysteries by Cochran, this was an enjoyable read back in time. The pace is steady and the murder has enough twists and turns to maintain interest. Consistent with the era, the story highlights some of the issues of the time from post-depression to the beginnings of women's rights and outcomes of those affected by polio, as well as the sights and sounds of the time. This is a new release; however, I understand there is a second in the works, Murder, She Uncovered, and I'm looking forward to reading it.

FTC Disclosure: I received a complimentary copy of this book in the hopes that I would post an honest review. This has not affected he content of my review in any way. 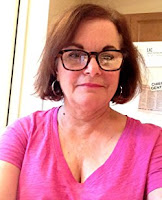 Mystery writing lets Peg indulge her curiosity under the guise of “work” (aka research). As a kid, she read the entire set of children’s encyclopedias her parents gave her and has been known to read the dictionary. She put pen to paper at age seven when she wrote plays and forced her cousins to perform them at Christmas dinner. She switched to mysteries when she discovered the perfect hiding place for a body down the street from her house.

When she’s not writing, she spends her time reading, cooking, spoiling her granddaughter and checking her books’ stats on Amazon.

A former Jersey girl, Peg now resides in Michigan with her husband and West Highland white terrier, Reg. She is the author of the Sweet Nothings Lingerie series (written as Meg London), the Gourmet De-Lite series, the Lucille series, the Cranberry Cove series, and the Farmer’s Daughter series.

August 2 – Reading Is My SuperPower – REVIEW

August 11 – Escape With Dollycas Into A Good Book – SPOTLIGHT