Spotlighting the newest in the Hannah and Tamar Mystery Series - The Misplaced Dog - on SALE this week for $0.99!

A gorgeous addition places Playful Paws and its staff at the center of a mystery.

It’s love at first sight when Tamar meets Rusty – the newest resident at the local shelter where she volunteers. However, the arrival of the well-trained and affectionate dog coincides with the onset of suspicious and dangerous incidents involving the shelter and its staff. Is it a coincidence or is the dog the key to solving a major crime? In this latest addition to the Hannah and Tamar mystery series, the sisters are determined to find out.

The Motivation Behind THE MISPLACED DOG


Both Cassidy and I are dog people - big dogs and little dogs. I especially prefer a lap-size dog, but I know a great dane who seems to think that description fits him. Growing up, my family had dogs when I was younger and then older. I don't really remember the dogs from the younger years. At some point, my mother decided to get a poodle as we all suffered from allergies and poodle dander is less of an irritant for many with allergies. Three generations of poodles and all spoiled like crazy.

As an adult, I wanted to get a dog, but many apartments didn't allow pets. At one point, some one I knew convinced me to go with her and help out at the local shelter. I took dogs for walks, cleaned out cages and runs, fed them and loved on them. And took a lot of antihistamines! I tried to adopt one terrier, but allergies got in the way.

The friend, who is now in charge of that shelter, spotted an ad for a poodle puppy and I got myself a puppy from a breeder who couldn't keep the pup or others. Cocoa has since gone over the Rainbow Bridge. A second dog, found abandoned in a park joined our family by default - a poodle mix. He and Cocoa kept each other coming and he is now with Cocoa.

Currently, we have three dogs - a purebred miniature poodle who was owner surrendered to a local rescue, a mini poodle mix found emaciated and rescued, and a lhasa apso-shitzu mix we inherited from one of our adult children (see below). They bring us much joy and are definitely counted as members of our family, even when they choose to sleep in odd places. 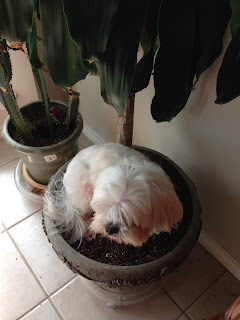 The release of The Mysterious Package in October 2016 marked the launch of the Hannah and Tamar Mystery series, a new mystery series for young adults and teens written by Christa Nardi and Cassidy Salem. Mrs. Tedesco’s Missing Cookbook was released in April 2017. The third book in the Hannah and Tamar YA mystery series, The Misplaced Dog was released in August 2017. All three books are available for Kindle, in paperback, or through Kindle Unlimited. For more about the series, click here.

Amazon Reviews for The Misplaced Dog

"Who knew that volunteering at Playful Paws would lead to discovering a murder had been committed! This is a cozy mystery for young adults. It is well written and the characters sparkle."

"Cute mystery for young teens. ... With such lovable characters, I can see this series becoming a best seller."

"Another great book for teens. I enjoyed reading about the sisters Hannah and Tamar. This time they have a new problem to solve. ... This is a fun, entertaining mystery!"


Read an excerpt from The Misplaced Dog

“I don’t get it. Why couldn’t you do your community service closer to home? I’m gonna be late for my study group at the library.”

The Playful Paws animal shelter was located on the eastern outskirts of Rosedale, Maryland. Only a 10 minute drive from Rosedale High, you’d think it was on the moon to judge from Hannah’s complaining.

“You know, I could drop you off at school and take the car the rest of the way myself. It’s not my fault you insist on driving.” Tamar knew that wasn’t going to happen.

Tamar had recently passed her driving test and was itching to spend more time behind the wheel, even if it meant putting up with her sister’s non-stop criticisms. Hannah, on the other hand, wasn’t about to give up the driver’s seat.

The Bertolet’s green Subaru Outback pulled up in front of a dreary, red brick building in Rosedale’s industrial area. The parking lot was half full.

“Alright. I get it. Your wish is my command.” Tamar slammed the car door shut and headed into the building.

The ever-present scent of disinfectant and incessant barking filled the building. Playful Paws was just one of the animal shelters in the greater Baltimore area that housed cats and dogs in need of a good home. Temporary residents, the animals were kept in two rows of enclosures in an old warehouse.

Tamar stopped to greet two other volunteers, Zola and Jason, who were busy sweeping out the enclosures and filling water dishes.

“Hi, Tamar. How’s it going?” Zola was a second-year student at Towson University, where she was majoring in zoology. Tall and slim with long blonde hair and big blue eyes, she looked like a model.

“Great. So looking forward to our next adoption event.”

Jason watched the two young women but didn’t say anything. A senior at a different high school, Jason flashed Tamar a shy smile. It was his second year volunteering at the shelter, and he was almost never at a loss for words, except for when Tamar was around. Zola was amused by his obvious interest in the slender, dark haired teen who seemed oblivious to his admiration.

Tamar spoke softly to the residents as she walked down the long row of enclosures to reach the office in the back. This Paws shelter had a total of 18 enclosures, eight large enclosures on one side of the aisle, 10 smaller enclosures on the other. The center currently housed 19 dogs.

Two dogs were curled up together in the enclosure closest to the office. A bit of an odd couple – a small dachshund and a full grown Irish Setter. When the setter raised its head and gazed into Tamar’s eyes, her heart melted. She immediately spoke to the setter.

Joel Newman, the manager, stood in the doorway to the office. Passionate about animal welfare, the thirty-something year old worked as a free-lance designer to pay his bills. He always wore jeans and a t-shirt regardless of the weather, and today was no different. “I see our latest guests have made an impression.”

“Wow. That setter is gorgeous. Where did she come from? How could anyone surrender such a beautiful dog?”

“First, she is a he. Of course, it’s hard to tell the way he’s curled up right now. A lady found him wandering around the industrial area and dropped him off right before you got here. He has a collar but no tags. I was about to check to see if he’s chipped.”

Tamar reached for the handheld RFID reader. Although Maryland doesn’t require owners to have microchips implanted in their pets, the widespread practice makes it easier to identify and contact the owners of lost pets. As soon as she let herself into the enclosure, the dog sat upright and smiled; at least it looked like a smile to her.

She crouched down and held out her hand, waiting for the dog to come to her. He ambled over and smelled her hand before giving it a gentle nudge. She scratched him behind the ears and stroked his silky fur. He had a leather collar, his fur wasn’t matted, and he wasn’t shy.

The small brown dachshund was soon bouncing around her feet, demanding her share of attention. With the scanner tucked under her arm, Tamar tried to pet them both.

“You do realize you can’t play with them and scan the setter at the same time.” Joel chided her. “I think I’d better do it myself.”

Joel let himself in and took the scanner from her. Standing next to the setter, he commanded, “Sit.” And the dog sat. As he waved the scanner over the animal’s left shoulder, an indicator on the device flashed.

“Great, it looks like he has a chip.” He pressed a button on the device to save the reading and smiled. “Now, maybe we can find out who he belongs to.”

Back at the desk, Joel attempted to pull up the scanned data on his screen. “That’s odd.” A popup message indicated that no ID data had been found.

Tamar peered over his shoulder. “Must be an old or faulty chip.”

“What about the dachshund?”

“Already checked. No chip. No collar, either. Found her sitting outside when I got back from lunch. Well, since it looks like these two guys are going to be here for a while, we might as well give them names.”

Zola had walked over and heard the latter part of the conversation. “Let’s call the dachshund Ducky.”

“And the setter looks like a Rusty to me.” Tamar said.

“Sounds good to me. Let’s get their general descriptions, nicknames, and photographs into the database. I didn’t notice any immediate medical needs, still I’ll let Dr. Goodman know we have two new guests.”
Copyright © 2017. All rights reserved.