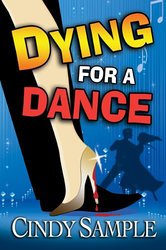 Discovering she has two left feet isn't the biggest problem for Laurel McKay when she agrees to learn a foxtrot routine for her best friend's Lake Tahoe wedding. Stumbling over the lifeless body of a sexy Russian dance star with her broken shoe heel stuffed in his mouth... is far worse. Almost as bad as running into the hunky detective she dated briefly before he disappeared from her life.
When another death occurs on the ballroom floor, Laurel finds herself waltzing her way into the dark secrets of the Golden Hills Dance Studio. Navigating kids, career, wedding planning and murder requires some fancy footwork. Can Laurel tango with a killer and stay alive?

Laurel McKay is doing her best to learn the dance routine for her best friend's wedding. Liz has arranged lessons at the local dance studio and Laurel meets others learning to dance - or dancing competitively. When one of the dance instructors ends up dead with the heel of her shoe in his mouth, Laurel has to deal with that complication and Tom - the detective she dated briefly who never called back. As she deals with the dance issue and the murder, she also has to come to terms with her mother's romance and the competitive dancers vying for title and prize money.

The murder at the dance studio has many suspects and Laurel is easily distracted from her dance lessons. She is well aware of her lack of coordination and also her desire to appease Liz who has become bridezilla. The characters are well developed, the pace is quick, and there is humor and romance as well as the mystery.  This is the second in the series, but I haven't read the first one - this can easily be read as a stand alone.  There are four others in the series so I see my TBR list growing...