Blog Tour: NUN BUT THE BRAVE (A Giulia Driscoll Mystery) by Alice Loweecey

Nun But The Brave

Giulia Driscoll’s sister-in-law barges into Driscoll Investigations and promptly passes out from OD’ing on an unknown drug. Two OD’d teenagers are found dead in the park and behind a convenience store. DI’s new client insists her missing twin sister is not dead and enlists Giulia as the “Missing Person Whisperer.” Hooray for steady work?

The missing sister’s trail leads to married, pregnant, ex-nun Giulia’s first experience with online dating sites, to the delight of her husband and employees. Those dates lead her to local Doomsday Preppers. They grow their own everything, and that everything may be connected to the drugs, her sister-in-law, and the missing twin. These Preppers are about to learn the true meaning of doom.

This installment of the Giulia Driscoll Humorous Mysteries is every bit as entertaining as NUN TOO SOON, the first in the series. Giulia is making a name for herself as able to find missing persons, but her real interest is finding out how her sister-in-law ended up almost dying from an overdose. Of course that means dealing with her brother who has yet to forgive her for leaving the convent.

As Giulia tries to find a missing sister and solve the riddle behind her sister-in-law's problems, there are just too many similarities that pop up, not the least of which are found on dating sites.  Well-written with enough action and humor to keep it going, Loweecey has done it again. Although this is the second in the series, it can easily be read as a stand alone. 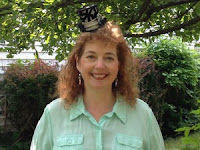 Baker of brownies and tormenter of characters, Alice Loweecey recently celebrated her thirtieth year outside the convent. She grew up watching Hammer Horror and Scooby-Doo Mysteries, which might explain a whole lot. When she’s not creating trouble for Giulia Falcone-Driscoll, she can be found growing her own vegetables (in summer) and cooking with them (the rest of the year).