About a month ago, I posted a review of MURDER BY THE GLASS, the second in the Wine Lover's Mystery series.  As indicated, I liked it enough to back up to the beginning of the series and find out how Nikki got her job at Malveaux Wineries... so here's MURDER UNCORKED:

Nikki Sands was like every other aspiring actress—waiting tables between jobs. But Nikki had taken serving wines to heart. She knew enough to impress Napa Valley’s golden boy, Derek Malveaux, who offered her a job at his vineyard. And though Nikki may have left her dreams of stardom behind, the world of wine is ripe with intrigue—and the seeds of sleuthing are planted…

Nikki has just set foot on Napa Valley’s rich soil when she realizes her new job may not be as safe as she thought. First off, Derek Malveaux is disconcertingly sexy. Second, his top winemaker is dead in the bushes outside Nikki’s cottage. It doesn’t take a connoisseur of foul play to know something’s taken a terrible turn… 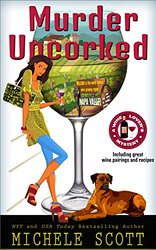 Nikki doesn't exactly like her job as a waitress but the bills need to be paid. She's also not stupid and isn't quite sure Derek Malveaux is being completely honest when he offers her a job and a weekend to try it out at his winery. But bills need to be paid. She didn't count on the dead body or her reactions to Derek. She isn't sure who to trust or not, particularly when it comes to some of Derek's family members.

This first book details not only the murder mystery - it provides some background on the step brother and his partner, the step-mother and others without being tedious. The plot is well-developed with enough, but not too many suspects. Guess I have a few more books to add to the TBR list...

MICHELE SCOTT'S AMAZON PAGE WITH LINKS TO ALL THE BOOKS:
MICHELE'S AUTHOR PAGE
Posted by Christa Nardi at 12:00 AM