Today's post is from Loretta Ross, author of DEATH AND THE BREWMASTER'S WIDOW:

I had the most ridiculous conversation with a young man at a gas station on the outskirts of Nashville last fall.

It was early October and I was on my way to Raleigh, North Carolina, to attend my first Bouchercon. If you're not familiar with Bouchercon, it's also known as the World Mystery Convention. Since 1970, mystery fans, authors, and industry professionals gather every autumn in a different city for a long weekend packed with panel discussions, awards presentations, social events, and what my friend Terri Lynn Coop would call "shenanigans".

A dedicated homebody with little travel experience, I had unwisely decided to make the drive by myself in two days. On the map, it looked easy, but then the map, unlike the countryside, was flat. I left early, planning to make Nashville by suppertime, but there was a bridge out in southern Illinois. After a long, meandering detour and a nerve-wracking grind through the worst highway work zone I have ever seen, I found myself entering Music City well after dark.

I live in rural Missouri, and by "rural" I mean "I can't see the nearest dirt road from my house". I had been worried about driving the interstate through downtown Nashville since I first mapped out my route. My house is between two towns, both county seats for their respective county.

Clinton, where I went to high school, has about 10,000 residents, three pizza places, two grocery stores, and a town square where the kids hang out. Warsaw, where I work, has fewer than 3,000 residents, one three-story building, three fast-food restaurants, and one stoplight. It's the only stoplight in the county.

There were no stoplights at all on Interstate 40, but there was, I think, more traffic than my little dirt road has seen probably since we moved here in 1970. It was moving at least ten miles an hour faster than I'm comfortable with and between keeping up to speed, being sure to maintain my distance from the other vehicles, and worrying about getting in the wrong lane and winding up in Texas by mistake, I was a nervous wreck. Really, it's a miracle there aren't handprints permanently imprinted in my steering wheel.

I had gotten a boost to my confidence through an odd coincidence as I approached Nashville. You could almost even see it as a sign. While I was fighting my way through the construction zone, a pickup truck passed me that had one of those memorial signs in the back window. It said, "in loving memory of Jerry Hicks". As chance would have it, I had an older half-brother named Jerry Hicks. Sixteen years older than me, he served with the Marine Corps in Vietnam and was the reason I made my character, Death Bogart, a member of the Corps. My Jerry passed away in 2011. He lived halfway across the country from me and we didn't see each other often. The last time I saw him was when I drove him back to the airport after our mother's funeral.

He told me I was a good driver.

So driving through downtown Nashville, in spite of my nerves, I dared to peek over to my right as I passed for fleeting glimpses of the city. Really, how could anyone help it? Massive, fantastic buildings rose like phantasms against a backdrop of clouds that painted an illusion of dark hills. In the October mist they took on a surreal, ghostly glow. The city looked spectral, like a mystical fairyland, a magical place that could enchant you, entice you in and then never let you go.

I still had to go on to Knoxville, where a hotel room waited for me, so I could only look longingly at all the passing lights. The flashing billboards and neon signs advertised restaurants and live music shows, movie theaters and stage plays, entertainment venues, museums, tours, shopping centers. More choices than I could even count. My fuel needle was dipping towards empty, though, so once I had navigated my way past the worst of the traffic, I found a place to pull off.

I stopped at an establishment that had a convenience store, two fast-food restaurants, and more gas pumps than all the gas stations in Warsaw combined. As I was filling my tank a young man came around, riding a golf cart, to check on the pumps. I wanted to know anything he could tell me about the rest of my route that night, so I engaged him in conversation. After chatting about traffic and roadwork for a few seconds, I said to him, "you know, I didn't get to see a lot of it, what with the seventy-miles-an-hour and being terrified and all, but I couldn't help but notice that you have a really beautiful city here."

The kid gave me a funny look and frowned thoughtfully.

"Really?" He shrugged and shook his head. "It's okay, I guess. But there's nothing to do here."
Thank you Loretta for sharing this! 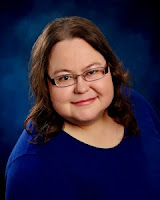 About The Author
Loretta Ross is a writer and historian who lives and works in rural Missouri. She is an alumna of Cottey College and holds a BA in archaeology from the University of Missouri – Columbia. She has loved mysteries since she first learned to read. Death and the Redheaded Woman was her first published novel.

Now for DEATH AND THE BREWMASTER'S WIDOW
Synopsis:

They call it “the Brewmaster’s Widow”; the abandoned brewery where Death Bogart’s brother died in an arson fire.

With his girlfriend, Wren Morgan, Death goes home to St. Louis to take on a deeply personal mystery. When Randy Bogart went into the Einstadt Brewery, he left his broken badge behind at the firehouse. So why did the coroner find one on his body? Every answer leads to more questions. Why did the phony badge have the wrong number? Who set the brewery fire? What is the connection between Randy’s death and the mysterious Cherokee Caves, where the opulent playground of 19th century beer barons falls into slow decay?

Not understanding how and why he lost his brother is breaking the ex-Marine’s heart. But the Brewmaster’s Widow is jealous of her secrets. Prising them loose could cost Death and Wren both their lives.

Review:
Two brothers, one a fireman and one a marine - both believed dead but one, Death, survives and can't face the death of his brother Randy. He opens a PI/Bounty Hunter business a few hours from his childhood home and hooks up with auctioneer Wren. Things get weird when Death is sent Randy's badge but with the wrong badge number. Death has PTSD and some health issues, but goes home to check it out and Wren follows a little later to help him settle Randy's estate. There are lots of twists and turns, tear jerking scenes, and humor. Self-defense by mustard and a well-concealed sling shot go right along with the unusual names and their history.

I can't say more without spoiling it for you. This was a quick afternoon read while traveling - it's a good thing I was on the plane as the tension built or I might have missed the boarding announcement. I already backtracked and the first in the series, DEATH AND THE REDHEADED WOMAN is on my kindle.


a Rafflecopter giveaway
Posted by Christa Nardi at 12:00 AM