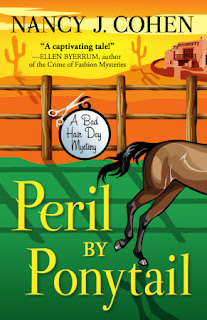 Marla and Dalton’s honeymoon at an Arizona dude ranch veers from dangerous to downright deadly faster than a horse headed to the corral. With her husband’s uncle–the resort’s owner–on the suspect list for murder, Marla races to prove his innocence. She hopes her blind trust isn’t misplaced, especially when she learns their relative has secrets he’d rather keep buried. As the bodies pile up, she digs deep to find the killer. With her new family in jeopardy, she’d better figure out who’s adding to the spirits haunting a nearby ghost town before someone she loves is hurt. Saddle up for Marla’s latest adventure in the Wild West where a Bad Hair Day is the least of her worries.

Little does Marla know that Dalton has an ulterior motive in choosing the ranch for their honeymoon. Dalton's uncle is set on restoring a ghost town to bring in more tourists for his ranch. Unfortunately, the project is either very unlikely or someone doesn't want this restoration to happen. A vanished worker is murdered and Marla is determined to resolve this mystery as well as why Dalton's mother and uncle haven't spoken in many years. It all seems connected somehow.

As I've come to expect from the Bad Hair Day Mystery series, Cohen moves the story along at a good pace, with some twists and turns well-placed. The characters are well-developed and the settings - the ranch, the mine, and the ghost town project - are so well described, it is easy to visualize the scenes but not so tedious to detract from the tempo. This was an enjoyable read. Although part of a series, this is easily read as a stand alone.