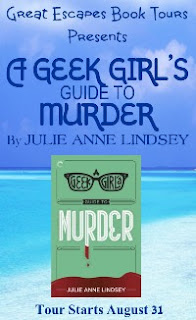 It's my pleasure to welcome Julie Anne Lindsey, author of A GEEK GIRL'S GUIDE TO MURDER as my guest today:

A Geek Girl’s Guide to Murder: A Television Series?

Back in April, I got an exciting call from my agent. A production company had interest in my story, and they wondered if the television rights were available, (They are) and if they could take a look at the manuscript. (They could!). If that wasn’t exciting enough, when I researched the company, I discovered they were responsible for many of my favorite shows and are a division of a larger company everyone in America knows well. The whole thing is quite thrilling for a newbie author like me. My manuscript wasn’t scheduled for final edits for weeks, but Harlequin worked their magic, pushed my edits to the frontline and got A Geek Girl’s Guide to Murder ready in record time. An early copy of my polished manuscript was sent to the production company in under a week, and I died a little from the possibilities. For anyone who doesn’t know: Harlequin is a fantastic, powerhouse company that makes things happen for their authors. They’ve been beyond amazing to me from the day I signed on with their smaller digital side, Carina Press, writing cozy mystery – a genre they aren’t even known for.


As for the production company, I’m still waiting. I guess television production is as slow as publishing, and that’s okay. I’m used to waiting and I’m cherishing the possibility of a Yes. I did some research and learned the request for my manuscript isn’t an uncommon occurrence. Tons of manuscripts are requested and rejected every year for use in television and film. Still, I’m very excited. In June, my agent made a follow-up call to the company to check the status. She asked if anyone had a chance to give it a read yet. Someone had, and they liked it. (Cue fainting author). They’ve since passed my manuscript up the food chain for more reads and whatever comes next. I really need to find out what happens next. Hopefully, a rejection isn’t next…

So, I wait, but I can’t help dreaming of What If? What if my story becomes a television series? Who will play the roles? What if the series is a success? How could this change my life? Would anything change?

As I wrote the book, I kept a Pinterest Board for inspiration, so I know what the characters look like in my mind. I thought I’d share that with you.

My Mia inspiration was a combination of two of my favorite actresses. Her look is 100% Zoe Deschanel. Sure, Zoe’s already rocking my favorite sitcom, New Girl, but Zoe’s signature look was a major source of inspiration for this character. Since Mia has a twin, Bree, Zoe plays both roles in my mental script.

As for Mia’s personality, that sassy mess comes from my love of Felicia Day. Felicia is a self-proclaimed nerd. She loves all the things I think are very cool and gave Mia her sparkle. Plus, Ms. Day is hilarious. I love her.

As for Mia’s best friend, Nate? Well, my love for Marvel, Norse mythology and Loki mad Tom Hidelson my inspiration for Nate, the red haired god. I did some digging (mostly on Pinterest) for a true ginger that I could use for inspiration and I found this guy, Rob Cattanach. Not bad, eh? It’s okay if you need a minute before moving on. I did.

Finally, the inspiration for Mia’s hero Jake Archer comes from one of favorite actors ever: Taylor Kinney. He’s got the eyes, the abs and the attitude to make a perfect country boy with a secret.

Maybe nothing will come of my manuscript making rounds at the production company, but it’s exciting to think about, and if you’re in the mood for a fresh new mystery series, I hope you’ll check out A Geek Girl’s Guide to Murder. Maybe it will make it to the small screen one day, and you can say you read it first! Who knows? However you meet my heroine and her cast of sidekicks, I hope it will make you smile!

IT manager Mia Connors is up to her tortoiseshell glasses in technical drama when a glitch in the Horseshoe Falls email system disrupts security and sends errant messages to residents of the gated community. The snafu's timing couldn't be worse—Renaissance Faire season is in full swing and Mia's family's business relies on her presence.

Mia doesn't have time to hunt down a computer hacker. Her best friend has disappeared, and she finds another of her friends murdered—in her office. When the hunky new head of Horseshoe Falls security identifies Mia as the prime suspect, her anxiety level registers on the Richter scale.

Eager to clear her name, Mia moves into action to locate her missing buddy and find out who killed their friend. But her quick tongue gets her into trouble with more than the new head of security. When Mia begins receiving threats, the killer makes it clear that he's closer than she'd ever imagined. 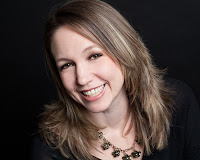 Julie Anne Lindsey is a multi-genre author who writes the stories that keep her up at night. She’s a self-proclaimed nerd with a penchant for words and proclivity for fun. Julie lives in rural Ohio with her husband and three small children. Today, she hopes to make someone smile. One day she plans to change the world.

Thanks Julie for stopping by today!  I look forward to reading A GEEK GIRL'S GUIDE TO MURDER!