On February 5th, COMMUNITY AFFAIRS, the third in this series was reviewed on this blog. Today, here is where it all started... With RED TAPE!

Synopsis (from Amazon)
What do you get when you combine a mystery with a touch of comedy and a pinch of romance? Red Tape. A little something for everyone!

Municipal Clerk Chelsey Alton gets more than she bargained for when she encounters an irate resident and loose cannon, Robert Triggers. Triggers has been harassing the employees in the small, Jersey shore town where she works and he becomes the prime suspect when multiple attempts to sabotage the municipal building are made. Chelsey begins to piece it all together and finds herself framed for a crime she did not commit. She narrowly escapes several attempts at her demise, only to find herself in a much more precarious situation. Will she make it out alive or end up a tragic victim at the hands of a madman? 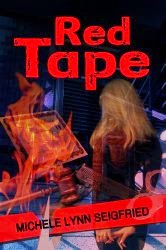 Review
As the Municipal Clerk, Chelsey has to deal with all the customers who come into the office and answer to the mayor and other town officials.  Robert Triggers is a major problem.  He wants dunes put in near his house so that if there is a storm, his house won't wash away.  He screams, yells, and causes all sorts of trouble. In the meantime, there are things going wrong, falling apart at the office, and Chelsey, along with her co-worker, are besides themselves trying to get the ballots all set for the election. Not that there was any doubt that Frita O'Donnell would be re-elected.  As Chelsey tries to keep things together at the office, she is arrested and charged with embezzlement.  Then Agent Sal Romero and Tex come into the story. Life as a municipal clerk is less than simple and at the same time friends and family are pressuring Chelsey to have more of a life. Along with all the problems, there are many humorous moments, mostly between Chelsey and Bonnie. Whether you've already read TAX CUTS (the second in the series) or COMMUNITY AFFAIRS or not, I'd recommend RED TAPE!