Synopsis (from Amazon)
Paige MacKenzie isn’t convinced there’s anything “sweet” about the small Gold Rush town of Sweet Sierra Gulch when she arrives in California to write an article for the Manhattan Post. But there’s plenty of history surrounding the gold fever that drew prospectors from afar in the mid-1800s, as well as the anticipation of romance when her favorite cowboy, Jake Norris, joins her later. 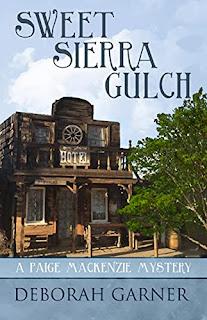 Everything seems to be falling into place until the owner of the local cafe goes missing, a gruff guest checks into the hotel, and an odd humming sound prevents a peaceful night’s sleep. Determined to get to the bottom of the mysterious events, Paige begins to follow clues. Will her search uncover a dangerous secret in the town’s old mining tunnels, or will her curiosity land her in over her head?
Review
Sweet Sierra Gulch was once a hub in the midst of the Gold Rush, and now is a small town with only a couple of hundred people. Even Paige is wondering why she selected this small town as she checks into the only 'hotel.' Her plan is to decide if there's a story to write, write it, and then enjoy the wine country nearby with her cowboy, Jake. Only she senses some friction and not everyone is as welcoming and friendly as Jangle. Then he goes missing and everyone is upset. The AAA ladies let Paige know they're sure she can figure it out.
Sweet Sierra Gulch is populated by the three A sisters, older residents, and a few younger ones. Red is a business man with the most touristy spot and great chili, only his behavior of late is suspicious. As Paige tries to figure out what happens, more surprises await her. The pace is good, the backdrop of the gold rush, and the characters of Sweet Sierra Gulch have depth where needed. Jangle was by far my favorite character.
This is the 6th in the Paige MacKenzie series. Each is a story of some historical note that interests Paige and a mystery unfolds. They can be read as stand alone mysteries, but it's always best to start at the beginning. This story is well-written with enough tension to keep it going, even between Paige and Jake. Cozy mystery lovers will enjoy this read.
Purchase Link
AMAZON
About the Author
Deborah Garner is an accomplished travel writer with a passion for back roads and secret hideaways. Born and raised in California, she studied in France before returning to the U.S. to attend UCLA. After stints in graduate school and teaching, she attempted to clone herself for decades by founding and running a dance and performing arts center, designing and manufacturing clothing and accessories, and tackling both spreadsheets and display racks for corporate retail management. Her passions include photography, hiking and animal rescue. She speaks five languages, some substantially better than others. She now divides her time between California and Wyoming, dragging one human and two canines along whenever possible.