About the Book
Alaska tour boat guide Stacie Calder faces the deep freeze in this scenic cozy series debut perfect for fans of Paige Shelton.
No nine-to-five cubicle career will suit Stacie Calder—the naturalist much prefers working in the great outdoors. Specifically, the spacious and spectacular Alaskan wilderness, whose rugged charms she shares with sightseers on the top deck of the tour boat where she works. But one May afternoon, Stacie’s passengers see more than glittering glaciers, frolicking harbor seals, climbing bears and soaring seabirds…they also witness a man lying dead in the frigid Alaskan waters. And it seems likely that someone gave him a fatal push. 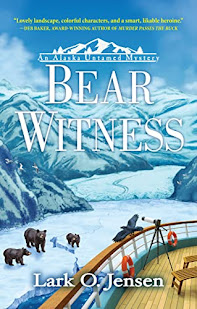 Stacie didn’t know the unfortunate victim, but he sure wanted to know a lot about her. He spent most of his final afternoon bombarding her with questions quite awkward to answer. And when he wasn’t in her hair, he was arguing incessantly with the boat’s beleaguered crew. Which makes for a suspect list about as long as the passenger manifest. Furthermore, as police helicopters relentlessly circle her boat in search of any clues, Stacie is shaken to find herself on that suspect list.


Before the tour boat reaches shore Stacie—accompanied by her beautiful blue-eyed husky, Sasha—must deduce just who sent the testy tourist tumbling into the turgid waters and have the authorities take custody. Because if she can’t, then the killer might aim a fatal ice-cold stare at Stacie.

Stacie Calder is a naturalist whose passion is learning more about nature and sharing that knowledge as the tour guide for a prominent Alaska tour company. She and her dog, Sasha, work with the same crew and captain all the time, and Stacie is very loyal to the captain and the company. Needless to say, when a man is questioning her and the company, she becomes uncomfortable and suspicious that he may try to ruin the company and searches for him. Only he's disappeared and now she's a suspect.

She insinuates herself into the investigation and the primary investigator, Liam, ultimately gives her permission to keep sleuthing with the promise that she'll share what she finds out. Not all her coworkers are enthused with her questions, nor is the dead man's 'friend' who continues to take the tour day after day.

Throughout the story, Jensen provides descriptions of scenery and wildlife, ice floes and glaciers calving, the birds, and other animals they encounter. The descriptions are rich and the reader can appreciate the experience. Having taken tours like that one, it's also very accurate. These are interwoven with the growing relationship between Stacie and Liam, the animosity of some of the crew, her sleuthing, and increased concern when one man is acting strangely.

This is a great start to a new series. The pace is good, Stacie is a likable protagonist, there are multiple suspects, and it's very well-written. There's something for everyone in this great story.