Today, I'm showcasing the audible version of Killer Deadline by Lauren Carr. I previously reviewed this book in kindle version:
https://christanardi.blogspot.com/2020/04/blog-tour-and-book-release-killer.html.
More information on Killer Deadline follows, but first Lauren Carr shares her memories and thoughts about Halloween...
What is it About Halloween That Makes Us Crazy?
by Lauren Carr
My family has a Halloween tradition. Of course, it includes watching It’s the Great Pumpkin, Charlie Brown. I think every family has that tradition. It’s right up there with Merry Christmas, Charlie Brown.
I’ve had to have seen the Great Pumpkin children’s special at least forty-five times (that’s how long ago it premiered on CBS) and still, at that moment when the moon is full and that dark figure rises up out of the pumpkin patch, I can feel my heart beating away with fright-filled anticipation.
Linus faints.
The eerie figure turns out to be a beagle, who has no candy to give to all the faithful boys and girls.
Sally demands restitution for missing out on her Halloween candy.
Believe me. This is a scary time of year. I think it has to do with the chilling fingers that seem to reach out of the dark windy weather to prick our skin to make goose bumps. The dying trees and falling leaves contribute to the eerie scene to turn our mood in the direction of spooky.
Even more bizarre is our yearning to be scared.
We aren’t so anxious to get the stuffing scared out of us during the summer. Can you imagine sunning yourself on the beach when a wolf man strolls up to you from the water’s edge to breathe down on you? Most likely, you won’t be thrilled when you yell, “Stop blocking my sun, Fur-Face!”
It has something to do with the setting.
Wait two months. When the weather turns cold, the leaves drop from the trees, the wind kicks up, and the moon turns full—you won’t only be looking out for the wolf man or vampire or Great Pumpkin—you’re hoping for one. If you’re lucky, all of them to come give your heart a good jump start.
Some of us aren’t quite so excited about being scared or maybe we scare ourselves too much.
Every year, our church has a trunk or treat, in which our members will decorate their vehicles and line them up on the soccer field for the children to gather their Halloween candy. Some of the volunteers will dress up in costume.
One year, I was dressed up like a farmer in overalls. My husband, Jack, went as himself. He’s much too distinguished to dress up in costume. As always, his gray beard was nicely trimmed and he was clad in his winter coat and gloves to keep him warm on that cold autumn night.
We had decorated the back of our SUV with fake giant spiders and spider webs. At the end of the evening, half of the vehicles had left as the time wore on and the children dwindled down to only a few stragglers or late comers.
Then, it was time to go home.
Most of the outdoor lights shut off. The only light left to illuminate the field was that cast by the headlights of the few remaining vehicles.
Leaving Jack alone, I had left the back of the SUV to go talk to some friends on the other side of the field when I saw a young mother and a little girl dressed up as Little Red Riding Hood, complete with a cape hurrying along the line of vehicles left to get whatever candy was left.
“Jack,” I called back to our SUV, “we got one more.”
A moment later, there was a high pitched scream. Her red cape flapping behind her, Little Red Riding Hood went flying across the field—screaming the whole way.
Her mother was right behind her. “I told you that some of them would be scary!”
Not far behind them, my husband was running with his arms outstretched offering the bowl of candy. “Wait, little girl! Don’t you want some candy?”
Apparently, Jack was in the front of the SUV when he heard me call. As the girl approached the back of the vehicle, he came out of the shadows. With his beard and dark coat, she thought he was the …
(Wait for it!)
Big Bad Wolf!
Now poor Jack is banned from Trunk or Treat. He’s still waiting to get mad about it.
Now for the spotlight on Killer Deadline 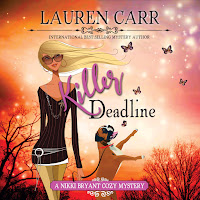 Folks in Pine Grove, Pennsylvania, claim that where Nikki Bryant goes, trouble is not far behind. Her refusal to back down from a challenge has made Nikki Bryant a top investigative journalist.

When an online friend nudges her to join him in a pact to reconnect with their first loves, Nikki and her boxer dog Elmo leave the bright lights of Las Vegas for the charming town of Pine Grove. There, she must face the biggest challenges in her career and life—the first love she had left behind and her father’s unsolved murder.

But before she has time to unpack her car, Nikki stumbles upon the dead body of local news anchor, Ashleigh Addison, her childhood rival. Could Ashleigh’s death be connected to an explosive news story that she had teased about airing live? Did that explosive story have anything to do with the murder of Nikki’s father?

With the clues in her father’s cold case hot again, Nikki intends to chase down the story of her life until she catches his killer—no matter what it takes.
Buy the Book:
Amazon.com ~ Audible ~ BookBub
Add to Goodreads 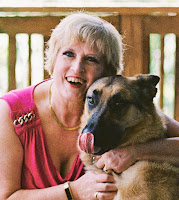 A popular speaker, Lauren is also the owner of Acorn Book Service, the umbrella under which falls iRead Book Tours. She lives with her husband and two spoiled rotten German Shepherds on a mountain in Harpers Ferry, WV.

Enter the Giveaway:
a Rafflecopter giveaway