I'm excited for the release of Connections, Conflict & Murder... 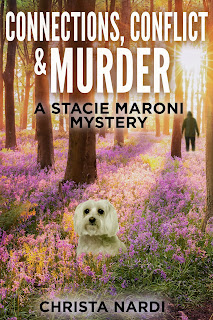 
A walk in the park, online connections, and dangerous discoveries.

When the cybersecurity expert who checked out Stacie’s computer turns up dead, Stacie and her good friend and IT whiz, Trina, find themselves entangled in the ensuing murder investigation. Who killed Sam and why? Was the motive personal or was Sam silenced because he discovered potentially illegal activity as part of a client’s routine security audit? With Stacie at her side, Trina reaches out to other tech people who knew Sam in an effort to connect the dots and, in the process, places both women in the sights of a killer.

New to the series? Get the backstory here.  Don't forget to enter the Rafflecopter giveaway!