Shot to death in his home, Morgan Tutwiler leaves behind a multimillion-dollar business and a daughter who hasn’t spoken to him in years. And she isn’t alone in wanting him dead. Plenty of people wanted the most hated man in Denver dead in P. H. Turner’s latest novel in the Claire Callahan series.

Reminiscent of the finest gumshoe storytelling, Secrets and Lies, would not be complete without Turner’s signature quirky characters and inventive plot. 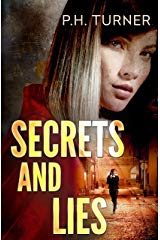 Claire Callahan is a PI for a law firm, and doesn't always like her job, though she does like her boss, Marsh, and a detective, Rafe. Morgan Tutwiler is a large account and the man managed to make many enemies. He had one daughter, who would inherit when he was killed and she'd moved away and had no contact with her father for some time. Claire's job was to 'babysit' Amanda and get her through the ordeal without being blamed for her father's death. The problem is, Amanda - and her adoring boyfriend - have the greatest motive of all. And the boyfriend, James? True to the title, almost all the suspects have secrets and lies. Aside from Amanda herself and James, there's the family he caused so much grief to, the father committing suicide. His son is trying to re-invent the company and make a go of it, only he has his own secrets. Claire is chasing down all the possibles and at each turn, there is another lie or secret. In between, she's dealing with her father, who she's only had minimal contact with since she was 6 years old. And he has secrets too.

The story is well-paced and well-crafted. The reader knows who the killer is from the start, though not why he's killed Tutwiler or how he's connected. That's the mystery that Claire has to unravel to uncover his existence. There are twists and turns, with connections being made at a steady pace. Claire knows there's something under the surface she's missing. She doesn't give up until she finds the link. This was a good read, more classic mystery than cozy, and looks to be the first in a new series. I liked Claire and will be looking for the next in this series.

P.H. Turner writes mystery and suspense novels set in the mountains and canyons of the West where she grew up and spent most of her working life. Pat worked in broadcast journalism on both coasts, the Midwest, and the Rocky Mountains. With roots to a Texas farm homesteaded in the 1850s, she’s returned to live within miles of the old farm.

Pat is a member of Sisters in Crime and Mystery Writers of America.

December 10 – I Read What You Write – REVIEW, GUEST POST

December 10 – Escape With Dollycas Into A Good Book – REVIEW