Book Review: DINNER AND A MURDER A Nikki Hunter Mystery #3 by Nancy Skopin

Dinner & A Murder is the third book in a mystery series featuring Nicoli "Nikki" Hunter, a Private Investigator specializing in covert bar and restaurant surveillance.

After surviving two attempts on her life, Nikki decides to do something normal for a change and attend her high school reunion. While there she becomes reacquainted with an old flame, Paul Marks, who is now an air traffic control supervisor. Nikki agrees to have lunch with Paul the following day, and over lunch she becomes convinced that something is terribly wrong. After a few beers and a little persuading, Paul confides that three controllers reporting to him have died in the last two months, under suspicious circumstances.

Nikki insists on looking into the deaths and, with the help of her former mentor, Sam Pettigrew, soon discovers that Paul himself is the target of a ruthless assassin. So much for normal. In an effort to save Paul, Nikki must, once again, put her own life on the line. 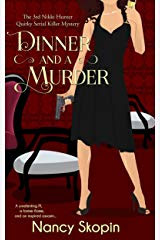 A compelling read, Nikki gets involved in what looks like a serial killer of Air Traffic Controllers when an old classmate asks for help. It may be coincidence, but then an attempt is made on Paul's life. This is fast moving with some POV of the killer mixed in with Nikki's own conflicts over commitment, her high school best friend's unhappy marriage and her quirky mentor, Sam Pettigrew. In  her between, Nicki is working covert bar and restaurant surveillance, eating and drinking in multiple places - what a job!

Nikki is an unpretentious and likable character dealing with her own issues, including quitting smoking. This is the third in the series, but my first and it easily can be read as a stand-alone. That said, you still might want to start at the beginning of the series and keep going. Beware: This is not a cozy - adult language and some may find this offensive.

Posted by Christa Nardi at 3:49 PM