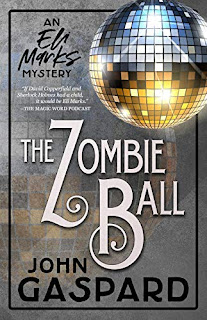 A Blast From the Past

Eli’s asked to perform his magic act at a swanky charity gala, The Zombie Ball– a former zombie pub crawl which has grown into an annual high-class social event. What begins as a typical stage show for Eli turns deadly when two of the evening’s sponsors are found murdered under truly unusual circumstances. Compounding this drama is the presence of Eli’s ex-wife and her new husband, Homicide Detective Fred Hutton. Under pressure to solve the crime before the 800 guests depart, Eli and his detective nemesis go head-to-head to uncover the bizarre clues that will unravel this macabre mystery.

I'm not particularly keen on zombies, but other than some of the high class guests doing their best to dress like a zombie, there's no paranormal or undead. The Zombie Ball is a charity event to support research on children's diseases and has emerged as an annual fundraising event. And an opportunity for the CEO of Finley Pharmaceuticals to take a bow as the highest contributor. Only this year, his original partner, now rival and CEO of Harper Pharmaceuticals, is the highest contributor. That in itself creates tension as Stella and Roxanne work to make sure neither is  slighted. Their green rooms - fancy waiting rooms - have to be exactly furnished and stocked, same attention and ego massaging.

Eli Marks is a magician as was his father. He's divorced and still reeling from that, but like anyone in the business, you take the paying gig when it comes in. When the original magician bails on the Zombie Ball, Eli gets the call. This is an opportunity for him and hopefully will lead to additional hires in the future. He doesn't have the same clout as the two CEOs - Dave and Leo, or the other entertainer, Joey Dee an iconic comic and entertainer. Eli's green room is simple and not well stocked. Still he is thrilled to be the warm up for Joey, and excited to be there - until he runs into his ex-wife and her new husband. And then both CEOs are dead.

This was an engaging read from the magic to the tensions between characters, not the least of which are Deidre and her Homicide Detective husband. The pace is good, the suspects are all there, and then there is the finale and the killer. Eli nailed it - I didn't. Unknowingly, I started at the newest (6th) in the series. The good news? It is easily read as a stand alone. The bad news? I will have to go back and read the other five - I enjoyed it that much!  If you like soft-boiled or cozy mysteries, you'll enjoy this one, and a male sleuth was a nice change. But beware of filberts. 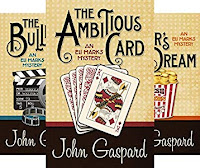