Blog Tour and Review: THE ROOT OF MURDER (Lovers in Crime Mystery Book 4) by Lauren Carr

Praise for Lauren Carr’s Mysteries:
“Lauren Carr could give Agatha Christie a run for her money!” -Charlene Mabie-Gamble, Literary R&R

As always, Lauren Carr brings an action-packed story that is almost impossible to put down. Her mystery plots have so many twists and turns that I didn’t know if I was coming or going. And the action just didn’t stop from the very beginning till the very end.” - Melina Mason, Melina’s Book Reviews

Content Rating: PG-13 (Lauren Carr's books are murder mysteries, so there are murders involved. Occasionally, a murder will happen on stage. There is sexual content, but always behind closed doors. Some mild swearing (a hell or a damn few and far between). No F-bombs! 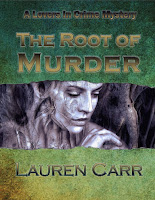 Homicide Detective Cameron Gates learned long ago that there is no such thing as a typical murder case. Each mystery is special in its own right—especially for the family of the victim.The homicide of a successful executive, husband, and father seems open and shut when the murder weapon is found in his estranged son-in-law’s possession. The circumstantial evidence is so damning that when her step-son, J.J. Thornton, agrees to act as the defendant’s public defender, he assumes his first murder case will be a loss. Only the report of a missing husband proves that this case is not as open and shut as it seems. Strap on your seat belts for a wild ride in this mystery rooted in decades of deception that sprouts into murder.

The Gates and Thornton families are in for a wild ride with this one. Detectives and lawyers abound in the family tree from the eldest Thornton on down. And in the smallish town of Homicide Detective Cameron Gates, she and the rest of the Thornton family have history with most of the inhabitants, including the victim and the first person they think is the killer. Needless to say, this causes a lot of tension all around.

When JJ is asked to defend the estranged son-in-law, he has mixed feelings. He believes in truth and the right for everyone to a defense - only he has negative history with the man from high school. The complications mount as JJ dated the daughter of the deceased in high school and now is engaged to someone else. His dating history becomes even more of an issue as other facts come out.

The pace is good and the tension is maintained or mounts throughout. This is a traditional mystery fraught with interpersonal conflicts. It can be read as a stand alone - the family relationships are sketched out for those not family with the Thorntons and the Faradays. As usual, Carr crafted an excellent mystery with unique dimensions and twists.

Fall in Love with These Other Lovers in Crime Mysteries:

Book Description: KILLER IN THE BAND

Joshua’s eldest son, Joshua “J.J.” Thornton Jr., has graduated at the top of his class from law school and returns home to spend the summer studying for the bar exam. However, to Joshua’s and Cameron’s shock and dismay, J.J. moves into the main house at Russell Ridge Farm, the largest dairy farm in the Ohio Valley, to rekindle a romance with Suellen Russell, a onetime leader of a rock group who’s twice his age. Quickly, they learn that she has been keeping a deep dark secret.

The move brings long-buried tensions between the father and son to the surface. But when a brutal killer strikes, the Lovers in Crime must set all differences aside to solve the crime before J.J. ends up in the crosshairs of a murderer.
Buy the Book:
Amazon ~ Barnes & NobleAdd to Goodreads

When Homicide Detective Cameron Gates befriends Dolly, the little old lady who lives across the street, she is warned not to get lured into helping the elderly woman by investigating the unsolved murder of one of her girls. “She’s senile,” Cameron is warned. “It’s not a real murder.”

Such is not the case. After Dolly is brutally murdered, Cameron discovers that the sweet blue-haired lady’s “girl” was a call girl, who had been killed in a mysterious double homicide.

Meanwhile, Prosecuting Attorney Joshua Thornton is looking for answers to the murder of a childhood friend, a sheriff's deputy whose cruiser is found at the bottom of a lake. The deputy had disappeared almost twenty years ago while privately investigating the murder of a local prostitute.

It doesn’t take long for the Lovers in Crime to put their cases together to reveal a long-kept secret that some believe is worth killing to keep undercover.

Spunky Cameron Gates is tasked with solving the murder of Cherry Pickens, a legendary star of pornographic films, whose body turns up in an abandoned freezer. The case has a personal connection to her lover, Joshua Thornton, because the freezer was located in his cousin’s basement. It doesn’t take long for their investigation to reveal that the risqué star’s roots were buried in their rural Ohio Valley community, something that Cherry had kept off her show business bio. She should have kept her hometown off her road map, too—because when this starlet came running home from the mob, it proved to be a fatal homecoming.
Buy the Book:
Amazon ~ Barnes & NobleAdd to Goodreads
Meet the author:

With over forty years of writing and publishing experience, international best-selling author Lauren Carr has played an active role in the revolution of independent authors.

While studying for her college degree in English and journalism, Lauren worked as an editor and layout design artist with the federal government in Washington, DC. It was there that Lauren learned the foundations necessary for book publishing.

Lauren’s debut mystery, A Small Case of Murder was a finalist for the Independent Publisher Book Awards. On the heels of that success, she accepted an offer from a traditional publisher for A Reunion to Die For.

When it came time to publish her third book, Lauren rejected offers from two traditional publishers, choosing instead to independently publish It’s Murder, My Son, which made it to #1 in sales on Amazon in cozy mysteries. She has never regretted her decision to become an independent author.

Realizing that she could use her experiences to help other writers achieve their dreams to become published authors, Lauren established Acorn Book Services, offering professional services to independent authors.

The international best-selling author of over twenty-five murder mysteries, Lauren has gone on dozens of virtual blog tours (most with iRead Book Tours!) and has seen first-hand that how an author publishes is irrelevant to success. The key is exposure to potential readers. Virtual blog tours are an excellent avenue for book promotion. Book spotlights, reviews, author guest posts and interviews are forever, unlike in-person book events, which become a memory as soon as they have finished.

With her vast experience, it seemed only natural for Lauren Carr to jump at the opportunity to join the iReads Book Tours team. She lives with her husband, and two spoiled rotten German shepherds on a mountain in West Virginia's Shenandoah Valley.

You can usually find Lauren plotting her next murder mystery in her writer's studio on her mountaintop. Visit Lauren's website https://mysterylady.net/ to learn more about her murder mysteries, Acorn Book Services, and now iReads Book Tours!


Connect with the author: