I needed a change of pace - so not a cozy mystery today, but romantic suspense...

Layne Davies needed a break—a break from the busy bodies in her small town of Keeneston, Kentucky and a break from dating men who turned into scared little boys upon meeting her father. That’s why she was so excited to have been invited to speak at a medical conference in Charleston, South Carolina. Never did she think her whole life would change the second she stepped on that stage.

Walker Greene can’t talk about his job. He can’t talk about what happened that one night off the coast of Nigeria when his team was ambushed. No one would believe him even if he could talk about it. But his training kept him alive until he was able to sneak back into his small hometown of Shadows Landing, South Carolina. But when people show up looking for Walker, he has no choice but to listen to his best friend, Dr. Gavin Faulkner, and turn to a total stranger for help.

Layne may be Gavin Faulkner’s estranged cousin, but that doesn’t mean she’ll drop everything to work with someone who Gavin refuses to tell her anything about . . . until she sees Walker Greene. All her protective instincts come alive upon seeing the wounded soldier and Layne knows there’s only one place to keep him safe—Keeneston. Walker becomes a hunted man, and Layne is determined to keep him safe as she finds herself drawn to him more and more each day. 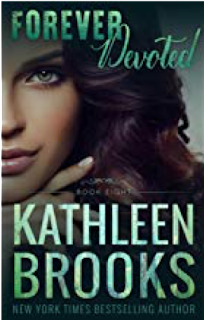 It's been a while since I indulged in a "bluegrass" romantic suspense by Kathleen Brooks, and this one did not disappoint.

Layne is a physical therapist getting hit on at a medical conference and isn't interested.  She already knows that Luke will whimper and run if he ever were to meet her family back in Kenneston, KY.  She is no wilting or weak female - she can take on most men, intellectually and in hand-to-hand combat. Her passion is working to rehab injured vets. In Charleston, a cousin she doesn't know - Gavin Faulkner - is a physician and at the same conference. When Gavin's good friend, Walker shows up injured and on the run - betrayed by a comrade in arms - Gavin knows that Layne is Walker's best shot at optimal recovery. Walker's a SEAL in a special unit, and the only other survivor of his team besides the one who killed his brothers and shot him. He's a threat to Jed and Jed wants him dead. Next thing Gavin knows he's spirited away by Layne to Kenneston, KY and her very large, very military connected family and the Rose sisters. Amidst the romance, the reconnection of a grandmother with her brothers and all their collective kids, and the tension of being hunted, there are some laugh out loud moments.

This is the 8th in the 3rd "bluegrass" series... the story is a stand alone mystery and the first I've read in this series. Brooks' writing is engaging and the plotline is easy to follow. Even though you know the good guys will win out, she pulls you into the story and you want to finish reading it (even if it is after midnight and you have to get up early). That said, I'd strongly suggest you start at the beginning with the Bluegrass Series (BLUEGRASS STATE OF MIND) and ease into the family and characters.  Then you can move on to the Bluegrass Brothers, and Forever Bluegrass. The newest one is Shadows Landing and is Gavin's story. I'm going to have to go back and read all the ones I missed in Kenneston first. I'm only sorry that there is no real place of Kenneston, KY - I want to visit and meet the Rose sisters!  Great book, great three-tiered series.  Definitely not a cozy and some scenes will either offend your senses or make you laugh.

Kathleen Brooks
Posted by Christa Nardi at 12:00 AM