After four bridge players are poisoned, newspaper reporter Wendy Winchester sets out to catch a killer who’s not playing with a full deck . . .

When the four wealthy widows who make up the venerable Rosalie Bridge Club never get up from their card table, this quiet Mississippi town has its first quadruple homicide. Who put cyanide in their sugar bowl? An aspiring member and kibitzer with the exclusive club, Wendy takes a personal interest in finding justice for the ladies.

She also has a professional motivation. A frustrated society columnist for the Rosalie Citizen, she’s ready to deal herself a better hand as an investigative reporter. This could be her big break. Plus, she has a card or two up her sleeve: her sometimes boyfriend is a detective and her dad is the local chief of police.

Partnering up with the men in her life, Wendy starts shuffling through suspects and turning over secrets long held close to the chest by the ladies. But when a wild card tries to take her out of the game, Wendy decides it’s time to up the ante before she’s the next one to go down . . .

Wendy is following her dream to be an investigative reporter, with the help of her maybe boyfriend Ross and her father. She herself was on her way to being admitted to the very selective Bridge Club and even observed some of the Gin Girls bridge games to learn the rules. And of course, now there is no chance for the Gin Girls to win the grand slam bridge title.

Wendy's first task is to find out as much as she can about the four women by talking to their families and getting as much history and dirt as she can. The four women and their adult children are all very unique and although revered in some ways, not the most likable of women.

There are multiple layers to this mystery set in Mississippi with a young society-columnist striving to become much more. The relationships of the four women are complex and motives are not apparent. The more information Wendy uncovers, the closer she gets and the solution comes to her. An interesting read with a twist on high society women and their behaviors. The layers are unraveled in due time at a steady pace. 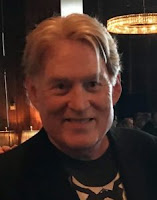 R. J. Lee follows in the mystery-writing footsteps of his father, R. Keene Lee, who wrote fighter pilot and detective stories for Fiction House, publishers of WINGS Magazine and other ‘pulp fiction’ periodicals in the late ’40’s and ’50’s. Lee was born and grew up in the Mississippi River port of Natchez but also spent thirty years living in the Crescent City of New Orleans. A graduate of the University of the South (Sewanee) where he studied creative writing under Sewanee Review editor, Andrew Lytle, Lee now resides in Oxford, Mississippi.