Angie’s first auction may turn out to be her last—when she bids on a coat of arms that someone would literally kill to possess . . .

Tagging along to an estate sale with her fellow Needlepointer, antiques shop owner Sarah Byrne, Angie Curtis impulsively bids on a tattered embroidery of a coat of arms. When she gets her prize back home to Haven Harbor, she discovers a document from 1757 behind the framed needlework—a claim for a child from a foundling hospital. Intrigued, Angie is determined to find the common thread between the child and the coat of arms.

Accepting her reporter friend Clem Walker’s invitation to talk about her find on the local TV news, Angie makes an appeal to anyone who might have information. Instead, both women receive death threats. When Clem is found shot to death in a parking lot, Angie fears her own life may be in jeopardy. She has to unravel this historical mystery—or she may be the next one going, going . . . gone . . .

Angie's first experience at an auction has led her down an interesting path. The burning question remains why the issue with something dating back to 1757. Her friends and grandmother and Tom all become involved. Mainely Needlepoint in Haven Harbor is now the focus of someone who has already killed once. Angie is afraid, not only for herself, but for her friends and family.

The story is well-paced and the relationships for Angie highlighted, sometimes with a sense of despair. The tension Angie feels and her fears come through, as well as Patrick's hope to protect her. There's a bit of history woven in, romance for Angie and Patrick, as well as for Sara, and the mystery to be solved. This is the seventh in the series, but my first. It can easily be read as a stand-alone. If you enjoy cozy mysteries, you'll enjoy this one, and likely the whole series.

Other prospective bidders were standing near me, waiting for me to move on. A middle-aged woman with short brown hair highlighted with blond took my place next to the coat of arms.

“What about the samplers?” she said to the bearded man with her.

He shook his head. “Just old stuff. Where would you hang them? I’d rather we used our share of the money to buy some good mahogany furniture, or maybe a gold-framed mirror.”

“Josie’s going to want the dining room table and chairs,” she answered. “She’s always wanted them. We don’t want to try to outbid her on those. What about Grandmother’s wedding ring china?”

“I don’t care about china. You can’t put that old stuff in the dishwasher anyway. What about the clock?” He pointed at a grandfather’s clock nearby.

“It never kept the right time. Drove me crazy.”

I didn’t know who they were, but they must be connected to one of the families who’d owned these furnishings. If they, or Josie, whoever she was, had wanted them, why were they being auctioned off?

A small mystery, but not one that concerned me.

I walked past several water-colored seascapes, a large oil portrait of a ringleted little girl in a blue dress holding a doll by its arm, and several framed World War I posters.

Three men were looking through a box of pictures—prints?—in a corner.

Who’d owned all these things? The parents or grandparents of that woman I’d heard talking about “Grandmother’s china”?

Once, each of these things now lined up to be sold had been chosen, had taken its place in a household, valued, and thought of with sentiment. Now, sadly, they were filling spaces in a large auction-house showroom, destined for antique shops, and, I hoped, for other homes where they’d be valued.

I almost laughed at myself for being so sentimental.

These were things, not people.
Excerpt from THREAD HERRINGS by Lea Wait. Copyright © 2018. All rights reserved. 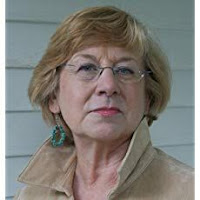 Lea Wait lives on the coast of Maine. A fourth-generation antique dealer and the author of the Agatha-nominated Antique Print Mystery series, she loves all things antiques and Maine. She also writes historical novels for young people set in (where else?) nineteenth-century Maine. Visit her at leawait.com.

November 3 – The Power of Words – REVIEW

November 7 – Escape With Dollycas Into A Good Book – REVIEW

November 9 – A Chick Who Reads – REVIEW