Today, it's my pleasure to welcome Carl Brookins, author of Grand Lac and his take on amateur sleuths. 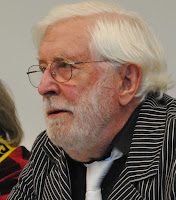 I’ve been participating in a local SISTERS IN CRIME chapter panel on amateur detectives. From that experience I have gleaned a number of useful ideas which I share here, thanks to my fellow sisters and my own experience. I do not maintain that these suggestions are in any way endorsed by Sisters In Crime. That doesn’t make them any the less useful for the writers who may read this piece, looking for a few pointers.

Amateur sleuths need to be special, in the sense that they have a higher level of interest or motivation. That interest can come from a very wide range of sources. My unlicensed detective, Alan Lockem, was Military Intelligence in an earlier life. His companion was a very intelligent and talented exotic dancer.

Some amateurs have friends who are cops like Betsy Devonshire, owner of a needlecraft shop, whose customers and knitting friends, and the cops bring her into crime solving. When an amateur detective has good relations with local law enforcement—and some don’t—it can add another dimension to your story. Amateurs are often able and willing to engage in questionable behavior to aid police and help solve the crime.

In the area of the paranormal, or spirit world, amateur sleuths may draw on that uncertain world for clues that ordinary citizens wouldn’t recognize. Occasionally a small group of otherwise ordinary individuals may pool their talents and boost access to the spirit world through their multiplicity of strengths. Such a group is called No Ordinary Women, a series in which the five characters refuse to accept things at face value, which leads them into danger and crime-solving of many sorts.

Nosiness is a helpful attribute. An inherent unwillingness to accept circumstances at face value is vital. Another useful attribute is life circumstance. My unlicensed detective referred to above is financially independent, as is his companion, Marjorie Kane. Thus, in GRAND LAC they can fly off to Idaho at a moment’s notice to aid Marjorie’s relative, accused of murder. Your amateur investigator must have a spouse or companion, or a career, which allows him or her to pivot to nearly full-time attention to the case (or body) that intrigue’s her. Presumably they have a normal job and life to return to after solving the case.
There are only so many relatives asking for help and so many law officers who will put up with amateur meddling, which mean an author ought to spend some time figuring out the context, social, professional and otherwise, presuming that a series will result, in a situation which does not provoke readers and reviewers like me to throw up our hands in frustration at the unlikely circumstances engaging the protagonist.

In sum, amateur detectives are mostly (but not always) sheer invention. Those with true talent and ability often end up working as professionals for law enforcement. The others often go gently into that good night.

Before he became a mystery writer and reviewer, Carl Brookins was a counselor and faculty member at Metropolitan State University in Saint Paul, Minnesota. Brookins and his wife are avid recreational sailors. He is a member of Mystery Writers of America, Sisters in Crime, and Private Eye Writers of America. He can frequently be found touring bookstores and libraries with his companions-in-crime, The Minnesota Crime Wave.

He writes the sailing adventure series featuring Michael Tanner and Mary Whitney. The third novel is Old Silver. His new private investigator series features Sean NMI Sean, a short P.I. The first is titled The Case of the Greedy Lawyers. Brookins received a liberal arts degree from the University of Minnesota and studied for a MA in Communications at Michigan State University.